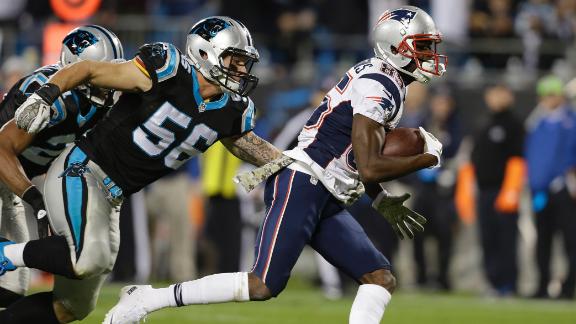 FOXBOROUGH, Mass. -- Wide receiver Kenbrell Thompkins, one of the feel-good stories for the New England Patriots in 2013 as he rose from undrafted rookie free agent to front-line contributor, was waived by the team Saturday.

Thompkins started in the season opener this year, but was inactive for two of the last three games as he was passed on the depth chart by five-year veteran Brandon LaFell. Thompkins totaled six catches for 53 yards in 85 offensive snaps this season (including penalties), and he doesn't play on special teams.

While the Patriots made the surprising move with Thompkins, they didn't activate veteran cornerback Brandon Browner or receiver Brian Tyms, both of whom practiced with the team this week as their NFL-issued four-game suspensions ended. This means Browner and Tyms won't play Sunday night against the Cincinnati Bengals.

The Patriots have a roster exemption for both Browner and Tyms until Monday, and will be required to make moves on their 53-man roster to account for them at that time.

As for the roster spot created by waiving Thompkins, the Patriots promoted linebacker Ja'Gared Davis from the practice squad. Davis is mostly a special teamer who will be part of the mix to replace the injured Nate Ebner, a core special teamer who has been ruled out for Sunday's game with a broken finger.

With the Patriots' offense struggling to find its groove, the release of Thompkins shakes things up a bit. With him out of the mix at receiver, the Patriots have Julian Edelman, LaFell, Danny Amendola and Aaron Dobson atop the depth chart. Dobson, the team's second-round draft choice from 2013, has only played in one game this season, and Thompkins' release potentially will create more opportunity for him.

Thompkins started eight games as a rookie, finishing with 32 receptions for 446 yards and four touchdowns, with one of the highlights a 17-yard touchdown with five seconds remaining to beat the New Orleans Saints on Oct. 13.