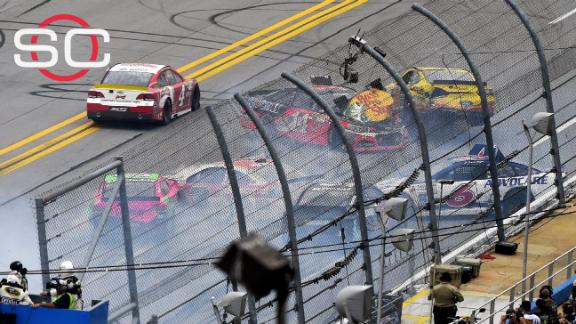 TALLADEGA. Ala. -- Kevin Harvick denied triggering a last-lap wreck Sunday at Talladega Superspeedway to ensure his advancing into the next round of the Chase for the Sprint Cup.

After one restart was aborted because of a crash before the leaders got to the start-finish line, Harvick, in 10th, was in jeopardy of falling out of the Chase as his motor was about to blow prior to the one attempt to have a green-white-checkered finish.

Harvick's car didn't get going on the restart -- just as on the previous one -- and he pulled to the outside lane. He clipped Trevor Bayne, causing a wreck that brought out the caution. At that point, the field was frozen, drivers could not gain positions andJoey Loganowas awarded the checkered flag for his thirdconsecutive win.

"That's a crappy way for Harvick to have to get in the Chase; to wreck somebody -- what I believe to be on purpose [but] maybe it wasn't," Bayne said. "The restart before that, he had engine problems and got out of the way.

"I think he realized if the caution came out, he was gonna be fine. So I go by and get hooked in the left-rear. Harvick is a really good driver. I think he knows the limits of his car and where it's at, so that's why I think it was intentional."

Denny Hamlinalso questioned it to reporters afterward and tweeted even harsher comments.

"The 4 could only run about 30 miles an hour," Hamlin said after the race. "I think he saw people coming and he knew he was so probably going to be 30th, the last car on the lead lap, so he caused the wreck."

That left Harvick 15th in the race and seventh in the standings as the Chase field was cut to the top eight after Talladega. He finished with a six-point cushion on Ryan Newman, who at ninth in the standings was the first driver to miss the cutoff to advance to the next round.

On his in-car radio prior to the final restart, Harvick expressed frustration that the race was being restarted after the initial aborted restart. Crew chief Rodney Childers mentioned that the best hope for them would be for there to be a crash.

"What we saw, there is no evidence right now that there was anything the 4 car [of Harvick] did that was questionable other than moving out of line," NASCAR vice chairman Mike Helton said about an hour after the race.

Helton said if any new video or angles came out in the next 24 hours, NASCAR could take action.

"There are some of the teams that questioned what the 4 car did on the restarts," Helton said. "We went back and walked through it with them. Procedurally from NASCAR, we don't see anything there that is suspect so far. We haven't seen anything."

Harvick, the defending Sprint Cup champion, said he was just trying to get out of the way.

"I was hoping that it would kind of get going a little bit better and those guys would push me so I could kind of halfway get going and it didn't go," Harvick said. "As I pulled up, I didn't even see the 6 [of Bayne] up there and clipped him and shot him across the inside. It sucks, but it worked out."

Earnhardt, who lost his opportunity to pass Logano for the win when Harvick triggered the accident, didn't blame Harvick for trying to hold his spot.

"What are you going to do?" Earnhardt said. "You can't say, 'Get to pit road.' He just needs to be able to allow people a place to escape."

Harvick believed he might have had a busted exhaust pipe that was hurting his ability to get going on the restarts. Childers said afterward the motor was going sour.

"He was trying to get out of the way and not lose too many spots," Childers said. "We're not the ones that invented this [system]."

Kenseth, who wouldn't have advanced unless he won the race, felt each of the races in the Contender Round had places where people wrecked intentionally to try to advance. Kenseth had contact with Newman while battling for position at Charlotte, Kenseth was turned by Logano for the win at Kansas, and then there was the Harvick situation.

He called it "a bit of a circus" to end the round.

"The 4 [of Harvick] knew he was blew up, so he said he was going to stay in his lane, so the 6 [of Bayne] then went up and outside and he clipped him and caused a wreck because he knew he'd make the Chase that way," Kenseth said. "I got wrecked out two weeks in a row from people doing what they had to do to make the Chase.

"But call it what you want. But I just feel like they lost total control of this whole thing. It's not what racing is all about."

The Chase field is reset now to even, with eight drivers -- Logano, Harvick, Kyle Busch, Carl Edwards, Jeff Gordon, Kurt Busch, Brad Keselowski and Martin Truex Jr.-- still in contention when the third round begins next Sunday at Martinsville Speedway.

Harvick the center of controversy after wreck
Ricky Craven shares his thoughts on Kevin Harvick's last-lap wreck at Talladega and Harvick's text message denying intentionally crashing to advance to the next round of the Chase.