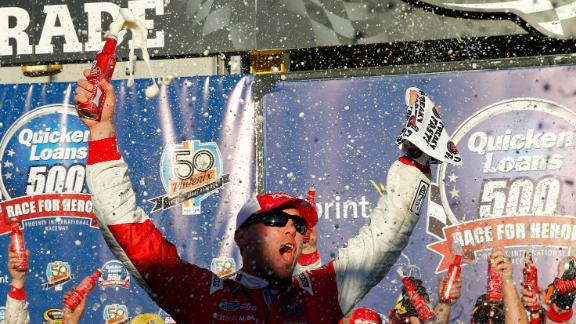 AVONDALE, Ariz. -- Kevin Harvick finally has a shot to win his first Sprint Cup championship, while Jeff Gordononce again was denied in his drive for No. 5.

Harvick routed the field Sunday at Phoenix International Raceway, where he had to win to move into NASCAR's championship finale. He'll go with Stewart-Haas Racing, the team he joined this season in his quest to win a title after 13 years of futility at Richard ChildressRacing.

"Coming over here and racing this year has given me new life," Harvick said. "It's like a dream. You lay it all out on paper and you say, 'This is what we want to do, and we want to race for wins and championships,' and all of a sudden you're a week away from everything that you talk about and dream about."

He'll race Denny Hamlin, Joey Logano and Ryan Newman next Sunday at Homestead-Miami Speedway for the championship. The title will be decided by finishing order, and all four will be vying for their first championship.

The championship field does not include Gordon or Brad Keselowski, who along with Harvick were the most dominant drivers all season. Keselowski has won a series-best six races, Gordon has won four times and led the points most of the season, and both showed the intensity of this new elimination-style Chase for the Sprint Cup championship with a pit road brawl last week that left both former champions bloodied.

A disappointed Gordon said the on-track aggression and off-track intensity at Homestead will make Texas and the past month of racing look tame.

"If it was that ugly the past few weeks, it's going to be real ugly next week," Gordon said.

There were no fights following this race, but it still was intense as the championship field flipped and flopped with every lap. The most shocking change came after Gordon had crossed the finish line in second behind Harvick and thought he was in. Instead, Newman needed one more position to bump Gordon out of the final four. He ran Kyle Larson high up the track to get the rookie out of his way to claim an 11th-place finish that put him in the Chase.

"I didn't take him out," Newman said. "In a day or two, he'll understand. It's hard to rationalize that, but I did what I had to do. I don't like racing that way."

Gordon wound up missing the final by one point to Newman. He was tied with Harvick in the standings, but Harvick earned the automatic berth with his victory.

"That's the system we have," Gordon said. "I mean, I could have taken out Harvick, too, to make it in. But I didn't."

Also eliminated Sunday were Matt Kenseth, who finished third; Keselowski, who needed to win to make it in but finished fourth; and Carl Edwards, who was 15th.

It was a devastating blow for Keselowski, who won a race in each of the first two rounds of the Chase. But he fell into a hole because of a mechanical problem at Martinsville in the first event of this three-race round that he couldn't recover from despite strong finishes at Texas and Phoenix.

His mettle was definitely tested, too, as his aggressive driving style angered his competitors and led to two fights in four races. He was fined $50,000 for his postrace behavior at Charlotte last month -- actions that caused Kenseth to jump him from behind in the garage -- and he and Gordon both were bloodied when the drivers and the teams brawled on pit road after last week's race at Texas.

"We gave it all we had, it was a strong run, it just wasn't enough to advance," Keselowski said. "We did everything but win. We broke down in Martinsville, and it was a huge hurdle to overcome and it was probably going to take a win. Fourth wasn't going to be enough, and we knew that coming in."

What everyone else knew all weekend was that Harvick probably had the field covered.

His win Sunday was his fourth of the season in his No. 4 Chevrolet and reaffirmed that he's very difficult to beat at Phoenix. Harvick swept the season here, has won four of the past five races and the past three fall races.

His 2012 victory came the same weekend news broke he was leaving Childress at the end of the 2013 season, and his win last year provided one final hurrah with the only team he'd ever driven for in the Cup series.

"You can pretty much sum this whole year up as 'Holy cow,'" Harvick said. "It's definitely the best position that, myself personally, I've ever been in."

His competitors next Sunday all had to sweat it out to make it into the finale.

Newman needed the last-lap pass, while Hamlin and Logano both had issues early in the race that forced them to come back from a lap down and then drive through the field. Hamlin finished fifth and Logano sixth.

Hamlin, the defending winner at Homestead, loves his chances. He lost the 2010 championship to Jimmie Johnson because of a subpar finish in the final, and he said he's far more prepared to handle the pressure this week.

"I feel pretty optimistic," said Hamlin, a one-time winner this season. "Love it, love the opportunity. We're on house money now, so let's go have fun."

Logano, a five-time winner this season, will be racing to give Team Penske a sweep on the season. Roger Penske already won the IndyCar championship in September, and now his young driver can make it 2-for-2.

"It's all about how good your team is, and I feel like I've got the best team," Logano said.

Harvick Advances With Win At Phoenix
Kevin Harvick advanced to the final four of the Chase for the Sprint Cup with the win at Phoenix International Speedway.