Kevin Harvick moves into 3rd round 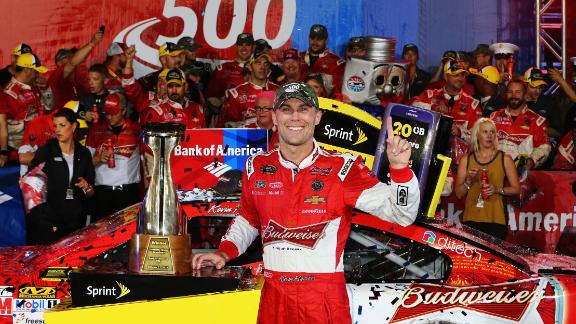 CONCORD, N.C. -- It was fight night at Charlotte Motor Speedway, where Kevin Harvick advanced into the third round of the championship and two drivers had to be restrained from brawling with Brad Keselowski.

Harvick won Saturday night to pick up an automatic berth into the next round of the Chase for the Sprint Cup championship, but the title hopes for Keselowski, six-time and defending champion Jimmie Johnson and Dale Earnhardt Jr.were severely hurt.

It led to frayed nerves and explosive tempers after the race. Keselowski tangled with Denny Hamlin and Matt Kenseth on the track, and both Chase drivers attempted to confront the 2012 champion after the race. Hamlin was held back by crew members and only managed to throw a towel at Keselowski, but Kenseth tackled Keselowski from behind between two haulers and appeared to take a swing at the driver.

Crew members quickly pulled Kenseth off Keselowski, and Keselowski crew chief Paul Wolffe appeared to have Kenseth in a choke hold as he pulled him out of the melee.

"When you see Matt Kenseth mad enough to fight, you know that this is intense because that's way out of character for him," Harvick said. "Every moment matters in this Chase, and Matt Kenseth knew that that one particular moment could have been the end of his Chase."

Nobody agreed who was to blame.

"It was really the safety. He was doing something with Hamlin, I had my seatbelt off, my [head-and-neck restraint] off, and he clobbers me," Kenseth said. "The race is over -- come back to pit road. If you want to talk about it like a man, go do that. But if you want to wreck somebody on the racetrack with people standing around, that's just inexcusable.

"There's no excuse for that. That's a champion, and he's supposed to know better than that."

Hamlin also said Keselowski behaved badly and called him "desperate, obviously" to save his title hopes.

"He's just out of control," Hamlin said. "Matt was nearly out of his car, and he just plowed into Matt and then ran into Tony (Stewart) and then went in through the garage and cleared out transmissions and did burnouts in the garage."

Keselowski cooled off in his Team Penske hauler before addressing the events. He said Kenseth "swung at my car" during the final caution to cause damage that ruined his race. He also said Hamlin "stopped in front of me and tried to pick a fight."

"I figured, if we're going to play car wars under yellow and after the race, I'll join, too," Keselowski said. "Those guys can dish it out, but they can't take it. I gave it back to them, and now they want to fight."

NASCAR met with Keselowski after the race and is reviewing audio and video of all the incidents.

It capped a terrible night for three of NASCAR's biggest stars. Keselowski, Johnson and Earnhardt all go into next Sunday's elimination race at Talladega in need of a victory. Keselowski finished 16th, Johnson was 17th and Earnhardt was 20th -- last in the 12-driver Chase field that will cut to eight next week.

Earnhardt broke his shifter early in the race, and it put him in a deep hole he couldn't climb out of.

"The vibration broke the shifter in half," Earnhardt said. "The car wasn't handling well, and the vibration was giving us problems."

Kenseth's rough night began before he even made it to the green flag, when he was penalized for an unapproved change to his car. Then came the issues with Keselowski, and he finished 19th.

Keselowski, the 2012 champion and most dominant driver of the first round of the Chase, also had a post-race issue with Stewart. He seemed to run into the back of Stewart after his issues with Hamlin and Kenseth, and Stewart backed his car up to crumple the front of Keselowski's Ford.

Watching the replay in the media center after the race, second-place finisher Jeff Gordon was clearly entertained. He put his arms in the air and yelled "Kenseth!" and thought Stewart's move was "awesome!"

"Obviously, there's some built up animosity toward Brad ... I better hold the rest of my thoughts," Gordon said.

"I rubbed into [Kenseth], and I think he gassed up and ran into Tony, and I don't think Tony knew what was going on, so he's probably upset, and he has every right to be," Keselowski said. "I'm sure when he sees the whole situation, he'll understand."

Rough night. Understand a lot of folks may not understand everything that happened and that's ok. I'm not perfect but also not the only one.

- Brad Keselowski (@keselowski) October 12, 2014Harvick, meanwhile, was celebrating in Victory Lane after he led 162 laps but needed a two-lap sprint to the finish to win his third race of the year.

"This is the night that we needed to win," he said. "I didn't want to go to Talladega next week."

Harvick Wins At Charlotte
Kevin Harvick drove away in a two-lap sprint to the finish to grab his third victory of the season and punch his ticket into the third round of the Chase for the Sprint Cup Championship.

Kenseth On Confrontation With Keselowski
Matt Kenseth discusses the issues he had with Brad Keselowski at the end of Saturday night's race at Charlotte Motor Speedway.