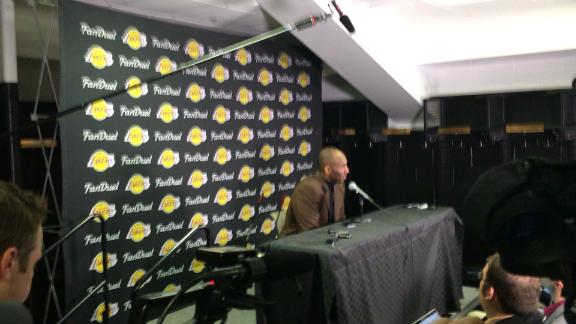 BOSTON --Kobe Bryantmet privately with the top executives of the Celticson Wednesday and was presented with a piece of the fabled Boston Garden parquet as a farewell gift before leading theLakersto a 112-104 win.

The Celtics' contingent, which included president of basketball operations Danny Ainge, co-owner Steve Pagliuca, and team president Rich Gotham, gave Bryant a framed plaque that included a piece of the former arena's court surface, a picture of Bryant near center court and a notation of the games he played in Boston.

The parquet given to Bryant was from the team's original parquet floor, which was officially retired in 1999, several seasons after it was moved from the original Garden upon its closure to the current arena. It was part of the Celtics' first of three court surfaces; the current floor was installed before this season.

The plaque also featured an inscription that read, "In recognition of your many legendary performances on the Parquet floor. From your friends and rivals, The Boston Celtics."

This final visit to Boston resonated with Bryant, who brought his family here to experience it.

"I remember my daughter was having a hard time in softball in a semifinal game, striking out, and she was crying. She was mad. I showed her the video of us losing to the Celtics and me walking off the court crying. I said, 'Listen, it's fine. It's fine. You've just got to bounce back.'

"That's the kind of profound impact that this building has had."

Earlier Wednesday, Bryant engaged in a 15-minute question-and-answer session with reporters in which he reflected on the Lakers-Celtics rivalry, how Boston's victory over L.A. in the 2008 Finals pushed him late in his career, and what he expects during his final stop in Boston.

"I grew up a really big historian of the game and understanding Boston's history, the players, the lineage of the players, the championships won," he said. "This place was always special to me from the first time I came into the league. The history is what I think makes this city different from all the rest."

Added Bryant: "I'll gaze up a lot. I'll look at the banners a lot, kind of scan the crowd a lot, try to soak it all in as much as possible. It's always cool when I come here. I always look into the rafters and scan the crowd and kind of appreciate the sea of green. I'll be doing that quite a bit tonight."

While the Celtics and Lakers are navigating rebuilds, to varying degrees of success in recent seasons, Bryant said he is certain the rivalry will shine again.

Bryant said he still gets cold sweats when he hears songs such as "In the Air Tonight" by Phil Collins, which became a signature pregame song during the Celtics' recent Big Three era. Bryant said he could hear the haunting percussion through the walls in the locker room and knew that game time was near.

He also said emotions sweep him when he hears other familiar songs that he associates with Boston's Big Three era, such as Journey's "Don't Stop Believin'" and the Dropkick Murphys' "I'm Shipping Up to Boston."

"I was waiting for Dropkick Murphys, and they didn't play it. In the fourth quarter, they kind of brought me home a little bit."

But Bryant said he is certain the 2008 Finals loss to Boston is what motivated the Lakers to come back and win two more titles, including a 2010 triumph over the Celtics.

"I can't remember the win without remembering the loss, and I say that in the most beautiful way possible," Bryant said. "I don't remember the loss as a painful experience or a horrible experience. I remember it as a beautiful moment because it helped me find the best version of myself and my teammates. I just remember the beauty of it. At the time, not so much."

Added Bryant: "This building is the place that helped push me win those two championships. I have bad memories, good memories, weird memories."

Information from ESPN's Baxter Holmes was used in this report.