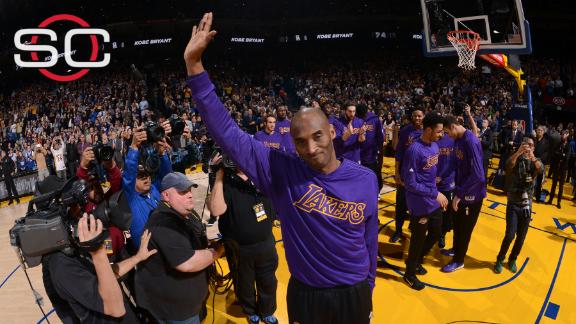 "It'll be a special All-Star because this is Kobe's last run,'' Dwyane Wade of the Miami Heat said.

Durant and Westbrook are All-Stars together for the fifth time, breaking a tie with Gary Payton and Shawn Kemp for most appearances by Thunder/SuperSonics teammates. Durant has scored more than 30 points in four straight All-Star Games, and Westbrook was MVP of the 2015 game.

Curry, the reigning NBA MVP, received the second-most votes with 1.6 million and will make his third straight All-Star start. This year's game will be played in Toronto, where Curry's father, Dell, finished his career.

"It's going to be a fun experience for both sides of my family," Curry said in a video posted by the Warriors. "I lived there for three years, my wife is from there, she has a lot of family that still is up there that's going to be able to celebrate with us. So I'm going to enjoy it and look forward to it."

Anthony edged the Chicago Bulls' Pau Gasol by 360 votes (567,348 to 566,988) for the final frontcourt spot in the East. Lowry overcame a 32,000-vote deficit to Cavaliers guard Kyrie Irvingin the last update to claim the second backcourt spot and the right to start on his home court in Toronto.

"It is an honor to be voted as a starter for the All-Star Game, especially for one in my home arena,'' Lowry said in a statement. "I am thankful to all the great Raptors fans across Canada and throughout the NBA.''

Irving, a three-time All-Star Game selection who missed the first 26 games of this season, congratulated Lowry and said he wouldn't be surprised if he wasn't added as a backup.

"He deserves it, man," Irving said of Lowry. "Personally, I don't feel like I deserve it just from the amount of games that I've played and the body of work."

New Orleans Pelicans forward Anthony Davis was in line to reap additional millions had he been named a starter for the West. Now, in order to avoid losing out on a projected $24 million over the life of the five-year extension he signed last summer, Davis must win All-NBA honors or be named league MVP.

Davis' extension from his rookie-scale contract kicks in next season and carries with it a provision known as the "Derrick Rose Rule," which would allow him to receive a max salary for a seven- to nine-year veteran, instead of the max for a zero- to six-year veteran in the first year of his extension. The rule allows a player finishing his rookie contract to make 30 percent of a team's salary cap if he has twice been voted an All-Star starter, twice been voted All-NBA or won an MVP award.

By failing to be named a starter for the West on Thursday, Davis can no longer qualify by virtue of having multiple All-Star starter selections. If he is the MVP this season or receives his second All-NBA selection, his total salary for the life of the extension is projected to be $144.54 million. Not achieving the benchmark would reduce his overall earnings to an estimated $120.45 million.

Davis shrugged off news that he had not been voted an All-Star starter.

"I don't care," Davis said after New Orleans' 115-99 win over theDetroit Pistons. "I'm worried about what's in this locker room."

Warriors interim coach Luke Walton said Green's success this season is a reflection of "what hard work does for somebody."

"He 100 percent deserves to be an All-Star this year," Walton said earlier this month, according to the Bay Area News Group. "He does everything right, anything you want out of a player. He plays hard every night. He's skilled. He passes. He shoots. He dribbles. He sacrifices for the team."

All-Star Game reserves, voted on by the league's coaches, will be revealed on Thursday.

Bryant, playing in his 20th season, announced in November that he would retire at the end of the season.

Assuming he plays, Bryant would be the fourth player to start an All-Star Game at age 37 or older, joining Michael Jordan, John Havlicek and Kareem Abdul-Jabbar.

Since 1998, Bryant has been an All-Star every season except for the 1999 All-Star Game, which was canceled because of a lockout. Only Abdul-Jabbar has more All-Star honors, with 19.Bryant's 16 selections as a starter are the most in NBA history.

Bryant was the leading vote-getter for the fourth time in his career, also earning the honor in 2003, '11 and '13. He recently said he was "very thankful" for the high volume of votes he was receiving.

Bryant holds several All-Star Game records, including for most points scored (280) and most field goals made (115). He also became the youngest slam dunk champion during the 1997 All-Star weekend, when he was 18. He earned his first All-Star selection the following year.

The 2016 All-Star Game will held Feb. 14 at theAir Canada Centre in Toronto.