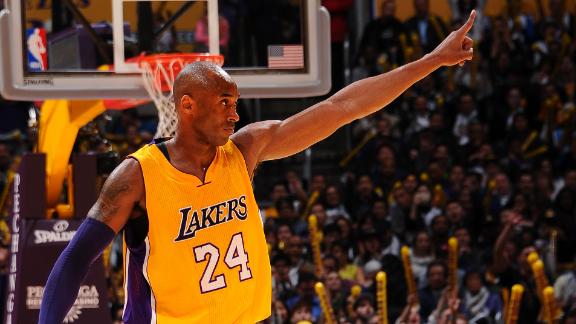 LOS ANGELES -- A decade ago, Kobe Bryant torched Sam Mitchell's Toronto Raptors for 81 points. Ever since, Mitchell has smoldered, boiling over at the very mention of Bryant's name or that game, a subject that has been broached innumerable times, the sorest of sore spots on Mitchell's coaching rsum.

So before Mitchell, now the coach of the Minnesota Timberwolves, faced Bryant one final time Tuesday, it wasn't surprising when he offered up next to nothing about the Los Angeles Lakers icon who is retiring at the end of this season, his 20th.

"Everybody has good players," Mitchell said when asked about facing Bryant.

And when asked about Bryant's scoring barrage on that fateful January night in 2006, the second-highest scoring game in NBA history, Mitchell glared for a beat.

"Can y'all ask me something [else]?" he asked, looking around the media scrum that surrounded him. "I think I've answered that question for the last five years enough."

What happened next almost felt inevitable.

Of course, Bryant lit up a Mitchell-coached team one final time, scoring a season-high 38 points in a 119-115 Lakers win that ended a 10-game losing streak, helping the Lakers avoid setting a record for the longest skid in franchise history.

In 33 vintage minutes, with a leather-lunged Staples Center crowd roaring as if happy days were here again, Bryant made 7-of-11 from beyond the arc, his most 3-pointers since hitting nine of them in March 2008 againstMemphis.

But most important for the Lakers, Bryant helped lead a comeback charge after the team blew a 16-point second-half lead over the Timberwolves. He scored 14 of the team's final 18 points, sealing a much-needed win.

"I hate him," Mitchell said afterward. "If I don't ever see him again, it will be too soon. I hate him."

Bryant laughed when Mitchell's comments were relayed to him.

"Well, thank you for the hate, I appreciate that," Bryant said. "Truly, I love that."

But Bryant downplayed his night, and the praise and surprise surrounding it.

"It's like, tonight I made shots I was supposed to make. I made open looks and I made them. Then when that happens, you tend to get in a rhythm. You start making a little more difficult shots."

To Bryant, it was as simple as that, but it was still a stark contrast from earlier in the season, when Bryant shot 29.6 percent from the field in his first 17 games, firing a torrent of air balls between desperate pump-fakes.

Back then, he was playing so poorly, many called for him to retire early.

Because of those rough outings, Bryant was asked if he savored Tuesday even more, but again the answer was no.

"I take the good with the bad," he said. "I have a great sense of balance. There's a lot to learn from the really, really poor games. I think the really bad ones are very difficult to go through, but when you look back, they're actually more enjoyable, because you really have to figure out a lot about yourself.

"That stretch there in the beginning of the season, it was like, 'What the hell am I doing out here?' And you really have to dig deep and find yourself through that. Those are more rewarding than these games."

Nevertheless, there was no shortage of awe from Bryant's teammates, and especially the opponents.

"He's the greatest of my generation," said Timberwolves guard Andrew Wiggins, who scored 30 points. "He perfected the game of basketball."

"When I get old, I can tell my kids I played against Kobe," said Timberwolves point guard Ricky Rubio, who added 10 points and 15 assists.

"It was just another Mamba moment to add to the collection," said Lakers rookie guardD'Angelo Russell, who scored 18 points off the bench. "There should be a museum of just Mamba moments."

"Some of the shots, it's just like, 'How do you make it?'" said Lakers forward Julius Randle, who had 15 points and grabbed 12 rebounds. "Pretty unbelievable, but when you're in the game and you're battling, it's kind of hard to tell, but you know he's doing something special."

The Lakers' starters scored 46 points in the second half, and half of them came from Bryant, who made 4-of-5 from 3-point range after intermission.

Overall, it was a turn-back-the-clock performance that has happened only a handful of instances this season, and there's no telling how many more -- if any -- he has left in his dwindling career, which now has just 31 games remaining.

"I appreciate the fact that for two more months, I get a chance to see this," Lakers coach Byron Scott said.

And for all the on-court hatred that Mitchell might harbor toward Bryant, the two chatted with smiles on their faces in the hallway afterward, with Mitchell praising Bryant's work ethic and saying that the Timberwolves' young players should follow it.

The two embraced, said they'd speak soon, and Bryant walked away after again lighting up one of Mitchell's squads, though not as bad as he did a decade ago. But Bryant said he understands Mitchell's unease in even discussing that game.

"Listen, I gave him a hard time, too, about it, just joking and stuff like that," Bryant said. "But honestly, that night, there was nothing much he could've done. I was raising up and shooting over guys. It was just one of those freakish nights."

Bryant paused, and a devilish grin spread across his face.

"But I'll still continue to rip him every night I see him."