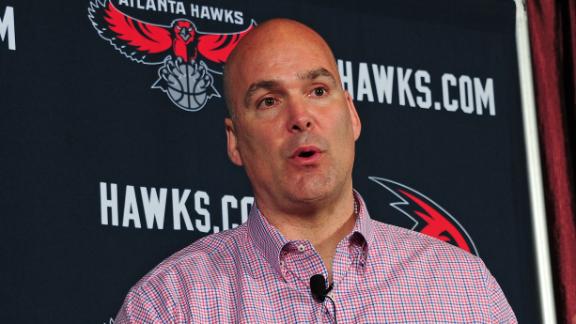 An ex-teammate says Luol Deng told him that he was "shocked" at statements made by Danny Ferry, but did not think the Atlanta Hawks general manager or anybody with the team was racist.

Kyle Korver, who plays for the Hawks and was a teammate of Deng's for two seasons with the Chicago Bulls, told the Atlanta Journal-Constitution that he reached out to Deng about Ferry's controversial comments.

"He told me that he didn't think that Danny or anyone with the Hawks was racist," said Korver, who is also on the executive board of the NBA Players Association. "He said he was shocked when he heard what was said, but that sometimes things just slip out.

"It was pretty amazing, really. He just wants everything to move on. He wants to get back to basketball."

Ferry, who took an indefinite leave of absence Friday amid calls for him to step down,made an inflammatory assessment of Deng during a conference call with the Hawks' ownership group in June as the team was discussing the then-free agent. The GM, paraphrasing a scouting report, described Deng as someone who "has a little African in him."

Deng, who was born in what is now South Sudan, issued a statement Wednesday, saying he was proud of his African roots and "saddened and disappointed that this way of thinking still exists today. I am even more disturbed that it was shared so freely in a business setting."

Hawks CEO Steve Koonin has resisted calls for Ferry to be dismissed. Meanwhile, Ferry issued an apology to Deng and said Friday that he plans to undergo sensitivity training and meet with local leaders.

Levenson said he was embarrassed by what he called an ill-advised attempt to improve the team's attendance and that he intends to sell his share of the Hawks.

The whole affair has been another embarrassment to the NBA, which only last month forced Donald Sterling into selling the Los Angeles Clippers after he was heard on secretly recorded conversations with his girlfriend asking that she not to bring African-Americans to his games. Steve Ballmer bought the Clippers for a record $2 billion.

Commissioner Adam Silver, who quickly issued a lifetime ban against Sterling, said he supported Levenson's decision to sell the Hawks but doesn't think Ferry should lose his job.