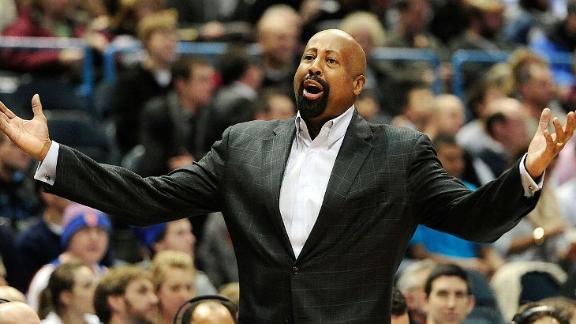 Former New York Knicks coach Larry Brown criticized the organization on Monday for the way he believes it has treated coach Mike Woodson.

During an interview on SiriusXM NBA Radio, Brown said the Knicks have failed to show public support for Woodson this season. He believes they should give new team president Phil Jackson a chance to coach and allow Woodson a chance to leave his post "graciously."

"He's out on the limb and that's not fair," Brown said of Woodson, who served as an assistant to Brown with the Philadelphia 76ers and Detroit Pistons. "For a guy that really turned that franchise around and made people proud of the way they played, I don't think he's been treated fairly, and that really bothers me."

The Knicks have performed well below preseason expectations this season. They started 3-13 and are on the verge of missing the playoffs a season after winning 54 games and a division title.

Woodson's job security has been the subject of widespread media speculation for much of the season.

Brown, who speaks with Woodson frequently, said he's "sick" over the way the Knicks have handled Woodson's situation this season.

He added: "He did a lot for that team, and that's unfortunate -- I don't think you treat people like that. And in the long run there is bad karma when you do that."

Brown, who currently is the head coach at SMU, also thinks the Knicks made a "troublesome" move by hiring Jackson in the middle of the season.

"You don't bring somebody in in the middle of the year and basically let Mike Woodson feel like he's not even part of this," said Brown, who was fired as Knicks coach in 2006 after finishing one season on a five-year, $50 million contract and went through an arbitration process to recoup some of his salary. "You're still trying to make the playoffs."

Brown says the Knicks should force Jackson, who was hired to serve as president, to coach, thereby replacing Woodson.

"Let him coach," Brown said of Jackson. "You're not going to make the Knicks better by living in L.A. and being there half the time and not talking to your coach. Let him coach. He was the best coach probably ever. Let him coach. If that's the way they want to do it, let him coach and give Woody a way to leave graciously."

Jackson, who signed a five-year, $60 million contract to run the Knicks, has said that he has no plans to coach.

It is widely expected that Jackson will fire Woodson, who is under contract for 2014-15, at the end of the season. Steve Kerr is expected to be among the pool of candidates Jackson chooses from to coach the Knicks next season.

Brown was also critical of the Knicks' decision to fire general manager Glen Grunwald less than a week before the start of training camp and replace him with Steve Mills.

"I don't know what he knows about the sport, to be honest with you," Brown said of Mills, who worked for Madison Square Garden during Brown's one year as Knicks coach. "I was with him. Steve Mills has no clue. They fired Grunwald, who was tremendous. They told [Grunwald] they couldn't [sign] any older players. They didn't make any changes as the season went on, and there were some opportunities to do that."

Brown was referring to owner James Dolan's edict that the Knicks sign younger players in the offseason to replace such veterans from the 2012-13 team as Jason Kidd, Rasheed Wallace, Marcus Camby and Kurt Thomas.

"When you lose Jason Kidd and Kurt Thomas and Rasheed Wallace, you lost your locker room," Brown said.

Kidd retired with two years left on his contract and was hired to coach the Brooklyn Nets. He has led the Nets to a playoff berth this season.

The Knicks are two games behind the Hawks with four games to play in the race for eighth place in the Eastern Conference.