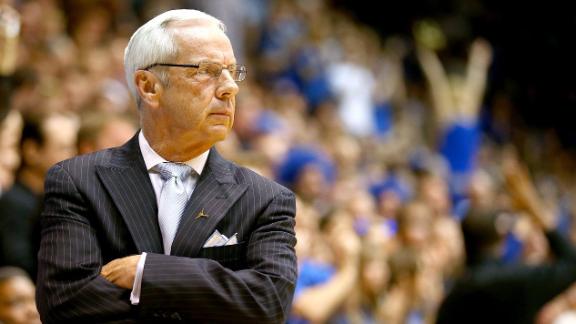 BLOOMINGTON, Ind. -- SMU coach and North Carolina alum Larry Brown has been keeping close tabs on the academic scandal enveloping his alma mater and said he is especially concerned that it could stain a man he has long revered.

"Absolutely I'm worried about it," Brown said after the Mustangs' shootaround at Indiana on Thursday. "What's troubling me the most is that some of that stuff dates back to coach [Dean] Smith, and we all know the character of that man."

Brown played for both Smith and Frank McGuire while at UNC, and Brown began his Hall of Fame career as a Tar Heels assistant in 1965.

An internal review released last month found that some 3,100 students -- 48 percent of them athletes -- benefited from paper classes in the Afro-American studies department. The report also found that some athletes, including basketball players, were steered toward those classes to retain their eligibility.

The NCAA has launched an investigation and recently began interviewing people about the case.

"My daughter took some of those classes," Brown said. "If you look around, there's not a school in the country that doesn't have classes like that. How many kids are taking online classes these days? That's not an excuse. I'm just saying there are classes like that that are legitimate."

Last month, North Carolina coach Roy Williams said he was "worried sick" about the pending investigation and acknowledged that he was worried about his reputation as well.

"I'm 64, so I'm not close to being ready to quit, but you also think, 'God, I don't want this to be what people remember about me,'" Williams said.

Brown, a 1963 UNC graduate, went out of his way to commend Williams.

"Roy has done a great job handling it," he said. "It's a great school. I just hope they can get through this."