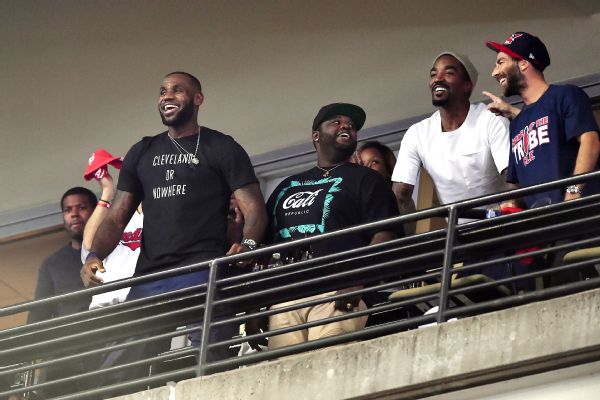 INDEPENDENCE, Ohio --LeBron James was at Progressive Fieldfor Wednesday's epic World Series finale between the Cleveland Indians and Chicago Cubs less than five months after his Cavaliers staged their own Game 7 for the ages against the Golden State Warriors.

Once again a decades-long championship drought disappeared. Once again the triumphant team came back from a 3-1 series deficit to do it. Only this time, Cleveland lost as the Cubs took the title with an 8-7 victory in 10 innings.

"That's probably the worst thing about sports is when you have such an epic game, one team has to lose," James said Thursday after the Cavs' shootaround. "It would have been great for both sides if the game was just called off, 6-6, and both of them get the trophy.

"Sports is a beautiful thing. It brings so many people together. It can be heartbreaking at times. It can be uplifting ... and it's never going to stop. It's going to go beyond all of us -- you guys covering the game, me playing the game -- and the thing about it is the support of teams and championships never stops. It's been going [on] forever."

James' chase-down block on Andre Iguodala that helped Cleveland secure its first pro championship in 52 years will be replayed forever, just as Kris Bryant's throw across the infield to Anthony Rizzo at first base will mark the end of 108 years of futility for the Cubs.

While James and his teammates -- many of whom, including a shirtless J.R. Smith, were also at Wednesday's game in suite-level seats-- got to experience championship bliss, the Indians' loss brought to mind all the years of postseason pain Cleveland was known for in the past: The Drive, The Fumble, The Shot and now, perhaps, The Rain Delay.

Yet James doesn't see it that way.

"I think the Indians' season was a success," James said. "Obviously to get all the way there and not be able to come out victorious, it hurts, especially for those guys that have worked so hard all season. I think we all can agree that the Cubs [were] the best team all season, and they had the most talent all season long. It's just different in baseball. [Teams] have different guys at the mound each game. It's very different, but they had their chance. You can't say they didn't give it their all. They gave a great shot. Just the Cubs [were] a better team going down the stretch."

While James has never lost a Game 7 in the NBA Finals, beating the San Antonio Spurs as a member of the Miami Heat in 2013 and the Warriors in June, he has lost four times overall in the Finals, including twice in Game 6 when his team held a 2-1 series lead.

"You never get past the pain," James said, referencing his losses to Golden State (2015), San Antonio (2007, 2014) and the Dallas Mavericks (2011). "I still think about and dream about or have nightmares about losing in the Finals.

The losses have weighed so much on James that after the 2015 Warriors defeat, he told reporters that he would rather not make the postseason if he knew beforehand that another Finals loss would be his fate.

"It's like you get all the way there and then you lose the big one, it's just tough," James said Thursday when asked to recall that quote. "It's tough on your psyche. It's tough on your mind. It causes a lot of stress. So that was just my personal take on it. Obviously I would never go into a season saying, 'Well, I'm just not good enough [to win it all] so let's not make the playoffs.' I want to give my team an opportunity every year to play for the big one."

Even though he had nothing to do with the Indians' Game 7 loss directly -- despite James' celebration ofRajai Davis' game-tying home run while wearing a "Cleveland or Nowhere" T-shirt seemingly already an iconic image -- James will suffer some consequences.

He made a bet with former teammate and Chicago native Dwyane Wade on the series. The loser has to dress up in a full baseball uniform of the opposing team when the two meet on the court. That means James has to find a Cubs hat, jersey, pants and cleats to wear to the United Center when the Cavs play the Bulls on Dec. 2 in Chicago.

Still, James was able to focus on the bright side for what is sure to be a World Series that will be talked about for years.

"The result is definitely not what I wanted and what the city wanted, but as a fan, extra innings in a World Series Game 7, it doesn't get any better in baseball," James said. "It's just a great time in sports right now that you're able to witness these droughts being ended. I mean, you look at the long drought the Cubs went through. You look at ours, or our city. It's a great time in sports for two Midwestern cities, especially. Being in Chicago and being in Cleveland, it's great for the fan bases."