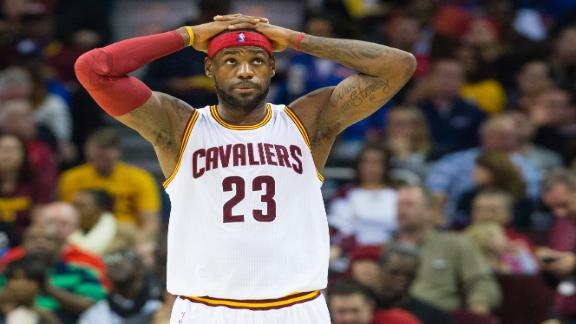 CLEVELAND -- With so much of the season still left to be played, it would be too early to say the Cleveland Cavaliers have hit a breaking point after a 110-93 loss to the Toronto Raptors on Saturday night dropped them to 5-7.

But LeBron James says the state of the Cavs is delicate at this early juncture.

"We're a very fragile team right now," James said after Cleveland saw an 18-point first-quarter lead turn into a 19-point fourth-quarter hole against the Eastern Conference-leading Raptors (11-2). "Well, we were a fragile team from the beginning. Any little adversity hits us, we just shell up. That's something that will come with experience."

James, who earlier this week said that looking back on his Heat's 9-8 start to the 2010-11 season gave him a "sense of comfort" in processing the Cavs' struggles, went on to reflect on how that campaign ended for Miami -- with a 4-2 loss in the NBA Finals to the Dallas Mavericks.

"This is not even the lowest it's going to get for us," James said. "You guys know, the lowest it can get is up 17 in the fourth quarter of Game 2 of the Finals and losing. It can get that low. Or being up 2-1 and going to Game 4 and lose three straight in the Finals. That's very low. So, I'm very optimistic. I'm very positive. More positive than I thought I would be right now, so, we look at what we did wrong, things that we did well and get ready for Orlando coming in on Monday."

Cleveland did plenty of things wrong against Toronto to extend its losing streak to four games. In what's becoming a recurring theme, the Cavs coughed up 20 turnovers leading to 22 points for the Raptors.

"There were again far too many unnecessary turnovers. Just ballhandling turnovers and mistakes that a good half of them are avoidable and you need those possessions, you really do," Cavs coach David Blatt said. "They're momentum-breakers or momentum-makers for the other team."

James was the biggest culprit, committing a team-high five turnovers.

"I think it's all chemistry," he said. "I think it has a lot to do with chemistry, knowing where guys are. For me, I'm throwing passes where I expect guys to be out there and that's a problem of mine."

Through their four-game skid, the Cavs have totaled 72 turnovers leading to 94 points for the opposition.

They were also blown out 51-19 against Toronto in bench scoring, this after getting outpaced 40-9 by Washington's reserves Friday.

"I feel we just got nothing from our bench," said Blatt, who later revealed he is planning on shuffling the starting lineup before the Magic game.

It was the Cavs' second unit that allowed the Raptors to claw their way back into it in the second quarter. Before the game, Toronto coach Dwane Casey said "one day you're the statue, the next day you're the pigeon" when describing the up-and-down nature of the league. The Cavs made that transformation in a matter of quarters. The Raptors used a 17-2 run in the second quarter to cut the Cavs' 16-point lead with 11:38 to go down to one with 8:34 remaining before halftime. Toronto then went on a 24-2 run from 7:04 to 52.9 seconds remaining in the third quarter to turn a four-point deficit into an 18-point lead.

"The fact that I can see that our team is very fragile and some of the guys, a 4-0 lead or a 6-0 run happens, and guys start reverting back to previous habits, [means] we got to continue to push forward," James said. "We got to continue to work the system, continue to play like we were before and go from there."

Dion Waiters agreed with James' assessment when asked if the Cavs were indeed fragile at this point.

"I believe so," Waiters said. "When teams go on a 6-, 8-0 run and everybody is looking around and we put our heads down like the game's over. I know I do it. We just got to do a better job of just staying with it."

Kevin Love, perhaps the lone bright spot for the Cavs on Saturday night as he scored a season-high 23 points after just 18 points combined in the past two games, also copped to bad body language.

"There's a little bit of that going on," Love said. "I think when we come out of a timeout and a team scores on us and gets a stop, scores on us again, we tend to definitely hang our heads. But that's something that we need to grow up from. I know that in certain aspects or in certain times, I'm guilty of it, too. I think everyone is on this team."

As precarious a position the Cavs find themselves in right now -- owners of the seventh-best record in the East when they were considered one of the favorites to lead the conference -- there were still some confident voices after the game.

"I haven't had a losing record in my career and will not have one here," Blatt said.

And James made sure to maintain a focused front.

"I can't be negative at all," James said. "Once I crack then it will trickle down to everybody else. So, I will never do that to these guys. I owe it to them and we owe it to our fans as well -- going out and playing the way we did in the first quarter, we have to sustain that as much as possible. Everyone has to be ready, from the starting five to the guys that come in off the bench, to sustain the same effort, the same energy, and we live with the results."

LeBron: "We're A Very Fragile Team Right Now"
After Cleveland's loss to Toronto, LeBron James called the Cavaliers a fragile team that doesn't yet know how to deal with adversity.