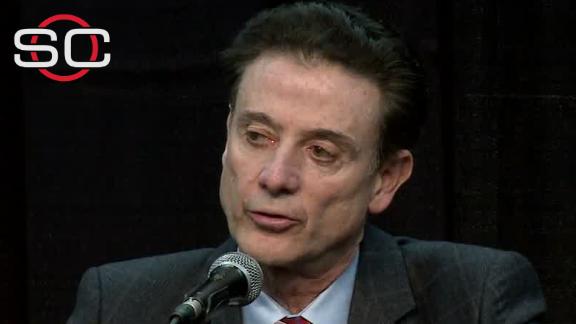 Louisvillehas imposed a one-year postseason ban for its men's basketball team amid the NCAA's ongoing investigation into an alleged recruiting scandal at the school.

The school announced the sanctions at a news conference Friday afternoon. University president James R. Ramsey acknowledged that it was "reasonable to conclude violations have occurred in the past."

"I recognize that this is a significant penalty for our program," said Ramsey, who was accompanied at the news conference by longtime coach Rick Pitino and athletic director Tom Jurich.

The Cardinals are ranked 19th in the Associated Press poll and have an 18-4 record this season, including a 7-2 mark in ACC play. ESPN's Joe Lunardi recently projected that Louisville would receive a No. 5 seed in this year's NCAA tournament.

Pitino said he informed the players of the decision about an hour before the news conference.

The postseason ban hit hardest for the team's two leading scorers, graduate transfers Damion Lee and Trey Lewis, both of whom came to Louisville so they could play in the NCAA tournament for the first time in their careers as seniors.

Pitino said that after he informed the team of the news, Lee and Lewis cried and the rest of the players hugged them.

"This is certainly a night of extreme pain," said Pitino, who called the news "a complete shock."

Powell also told Outside The Lines that she brought roughly two dozen women to the dorm from 2010 to 2014 and that five or six of the women had sex for money with former Louisville players, active players or recruits who were visiting the campus.Five former players and recruits also told OTL that they attended parties that included strippers paid for by McGee.

"While this was a difficult decision, it was made in the best interest of the university," Ramsey said.

Pitino said he and Jurich have been "kept in the dark" on details about the investigation. But after talking with Jurich last week, Pitino said he didn't think there was any chance that a postseason ban was coming this year.

"This is a punishment I thought would never happen this season," Pitino said. "This is a decision that's as harsh as anything I've seen."

Lee and Lewis both addressed the media later Friday night, acknowledging that they were shocked and devastated when they heard the news.

"We don't deserve this. This team doesn't deserve this," said Lewis, who transferred to Louisville after spending the last two years at Cleveland State.

"None of us really expected this happening today. Trey and I were truly devastated," added Lee, who leads the Cardinals in scoring after three seasons at Drexel.

Ramsey said he thought self-imposing the postseason ban would satisfy the NCAA and help the school avoid further penalties.

Ramsey said he received an update Thursday from the school's internal investigation, but neither he nor Smrt would offer any specifics on what the investigation found or offer a timeline for its conclusion.

Powell's attorney, Larry Wilder, told OTL on Friday that Friday's announcement means that the school "is taking this matter seriously."

"I think this was an admission by the University of Louisville basketball program and the administration that the things Ms. Powell wrote about in her book clearly happened and I think it's also clear from today's announcement that the University of Louisville is trying to be proactive and is taking this matter seriously," Wilder said. "The most bothersome part of this process is that there are people who are being punished who had nothing to do with what caused this discipline to occur and Andre McGee has withdrawn himself from the purview of the NCAA and he cannot be punished."

Pitino has repeatedly denied any knowledge of the parties and questioned Powell's credibility in a news conference last month. Ramsey said Friday that he will continue to support Pitino, Jurich and the program.

Wilder also told OTL that Powell has declined to speak with the University of Louisville police and has not been subpoenaed to go before the Jefferson County, Kentucky grand jury, which has heard evidence in this case. Wilder said it's his understanding that the NCAA investigation remains active.

Pitino said he sensed this past summer that this year's team "would be a magical group," and he thought the Cardinals had the potential to make the Final Four. The ban was announced just four days after Louisville's biggest victory of the season, a 71-65 win over No. 2 North Carolina.

"We believed it was in our grasp, all these dreams Damion and Trey had," Pitino said. "This was a team that was very much favored to go far in the [NCAA] tournament."

Louisville has not missed the NCAA tournament since 2006 and has recently been one of the most successful programs in college basketball's showcase event, winning the national title in 2013 and reaching the regional final three of the past four years.

Louisville is the second high-profile ranked team that will miss this season's NCAA tournament, joining 12th-ranked SMU, which was banned by the NCAA for multiple violations, including academic fraud and unethical conduct.

The Cardinals' postseason ban also applies to the ACC tournament, which starts March 8 in Washington, D.C. It will mark the second straight year that an ACC school will not participate in the conference tournament. Syracuse missed last year's event as a result of a self-imposed postseason ban.

ESPN's Andy Katz, ESPN.com's Brian Bennett, John Barr from Outside The Lines and The Associated Press contributed to this report. 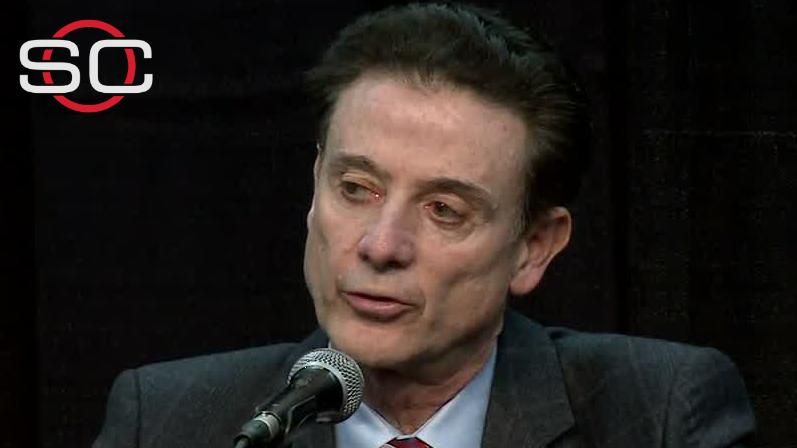