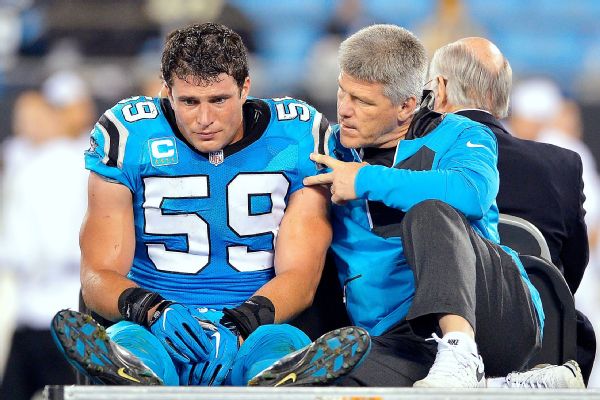 The Panthers had previously only confirmed that Kuechly was in the concussion protocol after he was carted off the field late in the fourth quarter of the Panthers' 23-20 win over the New Orleans Saints.

Kuechly now is considering traveling to Pittsburgh this week to visit a concussion specialist, Dr. Michael Collins, to get a second opinion on the injury and how he should proceed.

Kuechly, who suffered a concussion in the Panthers' 2015 season opener, is the sixth Panthers player to be diagnosed with a concussion this season.

Panthers left tackle Michael Oher has missed the past seven games with a concussion, and a source said he "isn't close to a return" at this time.

Panthers quarterback Cam Newton missed one game earlier this season with a concussion, while special-teams ace Colin Jones has missed the past two games and linebacker A.J. Klein missed Thursday night's game, both with concussions.Cornerback Daryl Worley also suffered a concussion in Week 6 vs. New Orleans.