Magic, MJ weigh in on Sterling 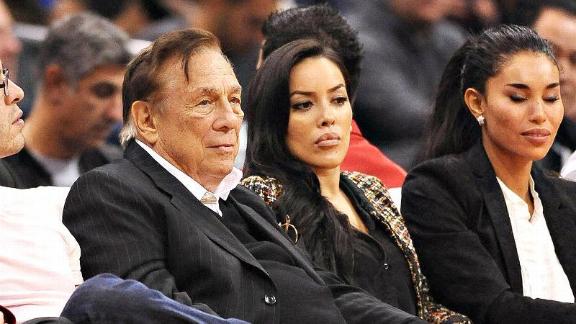 The comments that purportedly came from Sterling were made on an audio recording obtained and released by TMZ. In those remarks, the man believed to be Sterling referred to Johnson.

"He shouldn't own a team anymore," said Johnson, who also said Sterling was one of the first people he met after moving to Los Angeles, where he was a Lakers star for many years.

"I had a friendship with him. So for him to then make these comments, or alleged comments, about myself as well as other African-Americans and minorities, there's no place in our society for it. There's no place in our league, because we all get along. We all play with different races of people when you're in sports. That's what makes sports so beautiful."

The man making the comments also urged his girlfriend V. Stiviano not to bring black friends to Clippers games. The NBA and the Clippers are investigating, including whether the male voice on the recording is in fact Sterling's.

The website Deadspin released an extended 15-minute version of the purported conversation Sunday.

In that recording, the woman purported to be Stiviano asks, "Do you know that you have a whole team that's black that plays for you?"

The man, purported to be Sterling, responds: "You just, do I know? I support them and give them food, and clothes, and cars, and houses. Who gives it to them? Does someone else give it to them? Do I know that I have -- Who makes the game? Do I make the game, or do they make the game? Is there 30 owners, that created the league?"

Stiviano's lawyer released a statement Sunday afternoon that stated the tapes carrying the purported voices of Stiviano and Sterling were "legitimate." The quotes came from approximately an hour's worth of recorded conversation, which Stiviano says she did not leak to the media.

Jordan, a five-time NBA MVP as a player and the current owner of the Charlotte Bobcats, released a statement Sunday saying he is outraged and disgusted by the comments.

Jordan said he has two different perspectives on the racist comments -- one as an owner and the other as a former player.

"As an owner, I'm obviously disgusted that a fellow team owner could hold such sickening and offensive views," Jordan said. "I'm confident that Adam Silver will make a full investigation and take appropriate action quickly. As a former player, I'm completely outraged.

"There is no room in the NBA -- or anywhere else -- for the kind of racism and hatred that Mr. Sterling allegedly expressed. I am appalled that this type of ignorance still exists within our country and at the highest levels of our sport. In a league where the majority of players are African-American, we cannot and must not tolerate discrimination at any level."

Anger, frustration and calls for action echoed around the NBA on Saturday after the recording surfaced. Everybody except for Sterling, who has a decades-long history of discrimination and offensive behavior, seemed to have a response.

President Barack Obama, asked to respond at a news conference with Malaysia's prime minister during his visit to the country Sunday, called the reported remarks "incredibly offensive racist statements."

"I don't think I have to interpret those statements for you, they kind of speak for themselves," Obama said. "When ignorant folks want to advertise their ignorance, you don't really have to do anything. You just let them talk. And that's what happened here."

Obama also expressed confidence the NBA would address the situation, and said the United States still wrestles with "the legacy of race and slavery and segregation."

"Obviously, the NBA is a league that is beloved by fans all across the country," Obama said. "It's got an awful lot of African-American players. It's steeped in African-American culture. And, I suspect that the NBA is going to be deeply concerned in resolving this."

Miami Heat star LeBron James asked Silver to take aggressive measures, saying "there is no room for Donald Sterling in our league."

Silver spoke Saturday night in Memphis, Tenn., before the Grizzlies' game against Oklahoma City, repeating that the league finds the audio tape "disturbing and offensive" and that Sterling agreed not to attend the Clippers' game Sunday at Golden State.

"All members of the NBA family should be afforded due process and a fair opportunity to present their side of any controversy, which is why I'm not yet prepared to discuss any potential sanctions against Donald Sterling," Silver said. "We will, however, move extraordinarily quickly in our investigation."

Silver said the NBA needs to confirm authenticity of the audio tape and interview both Sterling and the woman in the recording. The Clippers will be back in Los Angeles for Game 5 on Tuesday night.

"We do hope to have this wrapped up in the next few days," Silver said.

Clippers president Andy Roeser said in a statement that the team did not know if the tape is legitimate or has been altered. He said the woman on the tape, identified by TMZ as V. Stiviano, "is the defendant in a lawsuit brought by the Sterling family alleging that she embezzled more than $1.8 million, who told Mr. Sterling that she would 'get even."

Roeser also said the recording does not reflect Sterling's beliefs. He added that Sterling is "upset and apologizes for sentiments attributed to him" about Johnson, whom he called Sterling's friend.