Manny Pacquiao OK if he doesn't get rematch with Floyd Mayweather 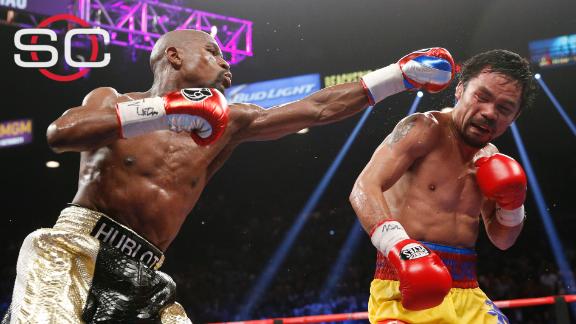 MANILA, Philippines -- Manny Pacquiao doubts he will have a rematch with Floyd Mayweather because the American says he's retiring. And besides, boxing is not his priority these days.

Mayweather beat Pacquiao in boxing's richest fight in May, and after he defeated Andre Berto last week for the 49th win of his undefeated career, he said he will retire.

"Boxing is not my focus because I can only fight next year, to give my shoulder a rest," Pacquiao told The Associated Press on Wednesday.

Pacquiao was still rehabilitating the right rotator cuff that was injured before the fight, and had surgery for afterward.

As a congressman, he said he was focused on building homes for the homeless in the southern province of Sarangani.

"I'm OK. Whether there is a second [bout with Mayweather], it's not a problem," he said. "I heard he has retired, so it doesn't matter."

For his next fight, he said he will take on any other contender, "because I do not choose my opponents."

Pacquiao also said he was waiting to see if U.S. boxing authorities will sanction Mayweather for taking an IV drip after the weigh-in for their fight in Las Vegas.

Punishment seemed unlikely, as Mayweather has been supported by the U.S. Anti-Doping Agency, to which he disclosed the infusion beforehand. The USADA said it contained no prohibited substances.

Pacquiao's camp was critical of anti-doping authorities who did not allow him to take medication for his rotator cuff injury before the fight.

On Mayweather's IV, he said: "What I want to know and clarify is, if he committed an offense, how will the rules be applied?"

Pacquiao refused to disclose his plans for his country's general election in May 2016. He told reporters he will soon announce whether he will run for re-election or governor of his province, or seek a seat in the Senate.

He is expected to make his announcement, and the presidential candidate he will support, before the Oct. 16 deadline for filing of candidacy papers.