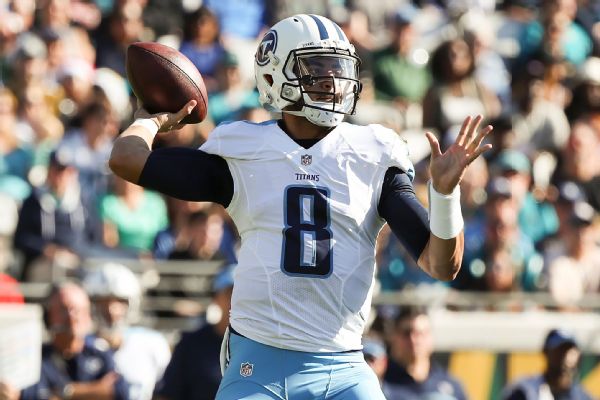 He will undergo surgery in the coming days.

Mariota was carted off in the third quarter with an air cast on his right leg after being sacked from behind byJaguarsDTSheldon Day.

Added Tennessee coach Mike Mularkey: "It's the first time this season we have been beaten like that. It's a bad time for it."

Matt Cassel, the Titans' backup, came on to replace Mariota. Cassel completed 13 of 24 passes for 124 yards with one touchdown and one interception.

At the time of his injury, Mariota had thrown for 99 yards on 8-of-20 passing with one touchdown.

"I think everybody to a man went to see him in the training room and wished him well," Cassel said.

Protecting Mariota was a huge priority of the Titans in his second season. They signed free-agent center Ben Jones and drafted right tackle Jack Conklin eighth overall and have been a good pass-protecting team all season.

"I hate it for him," Murray said. "He's a great player, he's a competitor and he'll bounce back. We didn't protect him at all today."

Cassel will get the start when the Titans play their now-meaningless regular-season finale next Sunday against Houston. The Texans beat Cincinnati 12-10 Saturday night to win the AFC South, eliminating the Titans from playoff contention.

Mariota carted off with fractured fibula
Marcus Mariota gets carted off the field with a fractured fibula after he was sacked by Sheldon Day in the third quarter. A portable cast was placed on his ankle, and he did not return to the game.