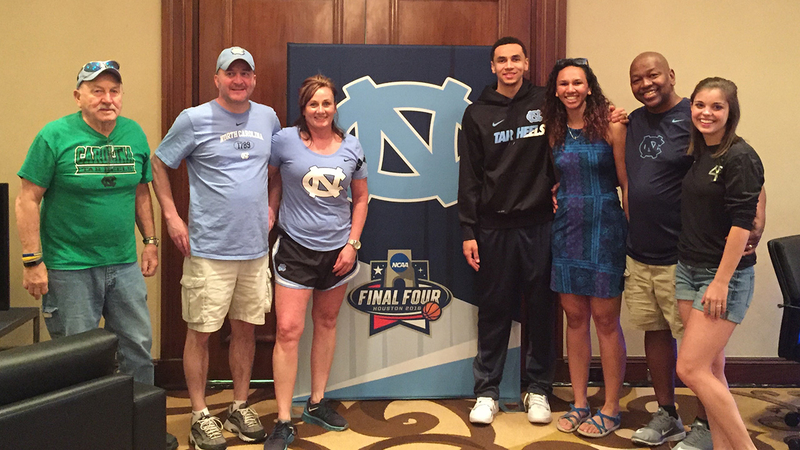 HOUSTON (WTVD) -- One of the Carolina Tar Heels key players is about to play the biggest game of his life.

Sherryl Paige beams with pride when she talks about her son, who has been working toward this day his entire life.

"I'm so very proud," she said. "It's just a dream come true for him. When your child is doing well and is happy, then you are happy, and I couldn't be happier."

Marcus formed a love for basketball at a young age, learning the game from his parents, his first coaches.

Marcus Paige and his dad

"He would go to my practices, and it's not like he didn't want to go, he was begging to go," she said, laughing.

"He was asked a question, 'Why do you want to go to North Carolina?' He said, 'I want to play for a national championship,'" said Sherryl.

Now that dream is about to become a reality as Carolina prepares to face Villanova in the NCAA Championship, but it was not easy getting to this point.

North Carolina's Marcus Paige reacts during the second half of an NCAA college basketball game against Duke in Durham, N.C., Saturday, March 5

Earlier in the season, UNC was in a slump and Marcus' shooting was missing the mark.

Related: Duke rematch about more than rivalry for Paige, UNC

"I think Marcus' confidence was a little down, and I think what he did was he started to concentrate on doing other things than letting his shot affect him or get in his way because as a shooter, and I'm a shooter, if your shot doesn't go in, you start to play head games with yourself," said Sherryl.

"There were a couple passes that he was indecisive about, and it led to turnovers, so I was like okay, bounce back and make your team better, and he did. He responded," said Sherryl.

Marcus' girlfriend, his mom, and his sister (from left to right)

The team is now making a run for the national title on basketball's biggest stage and Marcus' biggest fan will be there to cheer him on.

"I text him every gameday, and I just say 'Happy gameday. I believe in you. Go Heels! And this is another goal of yours. Have fun," said Sherryl.

"We're not done. We've got something left to do," Marcus Paige told students.

Marcus will always be a champion in his mom's book, no matter the outcome.

"At the end of the day, he's still my son, and no matter what he does he's special and he's gifted and I'm just humbled by his ability to handle everything that he's had to handle," said Sherryl. "He's where he's at. He's where he needs to be."