Mark Cuban: Kevin Durant is the 'one superstar' on Thunder 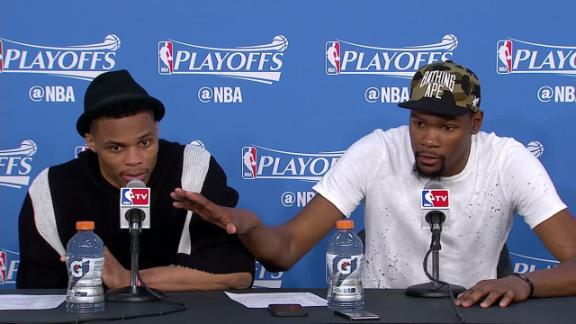 Cuban made a point before the Mavs' Game 5 ouster Monday to refer to Durant as the "one superstar" on the Oklahoma City Thunder. What about Westbrook?

"I think he's an All-Star but not a superstar," Cuban said.

Westbrook was asked about his reaction to Cuban's comments after the game, but Durant interrupted, putting his hand over Westbrook's microphone.

Westbrook, a five-time All-Star and four-time second-team All-NBA selection, averaged 23.5 points, 10.4 assists and 7.8 rebounds this season. His 18 triple-doubles were the most by any player in a season since Magic Johnson. Westbrook had 36 points, 12 rebounds and nine assists to help OKC close out the Mavs with a 118-104 victory Monday night.

However, in Cuban's opinion, the Thunder's relative lack of success when Durant missed most of last season with a broken foot proved that Westbrook isn't a superstar. The Thunder went 45-37 in 2014-15, when Westbrook averaged 28.1 points, 8.6 assists and 7.3 rebounds.

"You look at Dirk [Nowitzki]," Cuban said, citing his franchise player as an example of a superstar. "I'm not going to talk about other teams' players, I guess other than what I just said, but Dirk for 15 years won 50 games no matter what. We put Moe, Larry and Curly next to him and we won 50 games. Russ is certainly an All-Star, but I consider Durant a superstar."

Westbrook, who averaged 26.0 points, 7.2 rebounds and 11.2 assists in the first-round playoff series, nodded when asked after the game if he had heard about Cuban's comments before Durant stopped his co-star from answering the question.

"When you look at Dirk, all those years until now, he carries teams to 50 wins," Cuban said. "To me, that's the sign of a superstar. It wasn't until we got [Jason] Kidd that we had another Hall of Famer, and even J. Kidd was towards the end of his career. So for [11] years when Dirk won 50, that's a superstar. There are only a few guys where you can put them on any team and they win 50 games. To me, that's the definition of a superstar."

For his part, Nowitzki smiled when asked about Cuban's take on Westbrook.

"I'd take him," Nowitzki said. "I'd definitely take him."

Westbrook had clutch shooting percentages of 38.9 percent from the floor and 20 percent from 3-point range, according to NBA.com stats, defining clutch situations as the final five minutes of a game with the score within five points. Westbrook was tied for fourth in the NBA with 32 clutch assists in 161 minutes, but his 21 turnovers ranked second. Oklahoma City was outscored by 21 points in those 161 minutes.

"The way I define a superstar is, who do you want the ball in the hands of at the end of a game when you need a bucket?" Cuban said. "Who do you know that can get off that shot and make that shot? And that's your superstar. Or make that play. Like J. Kidd wasn't a great shooter, but you knew he was going to make the right play on either side. Without question, that's Dirk. J. Kidd in his prime, that was him.

But Cuban's take wasn't a majority opinion among the Mavs.

Coach Rick Carlisle said there were three superstars in the series: Nowitzki, Durant and Westbrook.

"Dirk's an all-time great player. That's been proven," Carlisle said. "Both Durant and Westbrook are destined. I just think they're that good.

"I thought Westbrook played beautiful basketball this year. I don't think there were many people in the basketball world who thought he'd be able to turn his game into both a scoring and distributing game, but he led the league in triple-doubles. That's a great credit to him, and I think his coach Billy Donovan probably had some influence there, too. But he was special to watch all year."