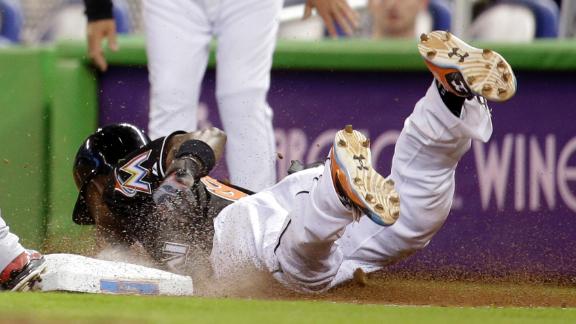 MIAMI -- Second baseman Dee Gordon was ruled out of the All-Star Game after dislocating his left thumb Saturday, but he said he thinks he avoided serious injury.

Gordon left the Miami Marlins' 14-3 win against Cincinnati in the seventh inning after he was hurt beating out an infield hit with a headfirst slide.

X-rays were negative, and there was no apparent ligament damage, manager Dan Jennings said. A physician popped the thumb back into place, and Gordon said he hopes to avoid the disabled list.

"There is definitely some relief it's not as bad as it could have been," Gordon said. "It's just sore. I actually was moving it around afterward."

The injury means both Marlins chosen as All-Star starters will miss the game. Right fielder Giancarlo Stanton has been sidelined since June 26 because of a broken left hand.

Gordon, who leads the majors with 122 hits and has 33 steals, was voted an All-Star starter for the first time. He tried to shrug off missing the chance to play in Cincinnati on Tuesday.

Tulowitzki said what makes this return trip to the All-Star game special for him is the chance to go with his young teammates, third basemanNolan Arenadoand LeMahieu.

"Those guys, when they were young, I tried to do my best to put my hands on them and make them good baseball players and understand the game, and hopefully they say that I helped them," Tulowitzki said. "At the same time, when they're going to an All-Star Game, you want to join them."

It is the first time in the Rockies' history that the team has been represented by three infielders at the All-Star Game.

"Hopefully, we'll get a chance, maybe late in the game there, to play, the three Rockies infielders," Tulowitzki said. "That would be pretty cool. That would be neat for the organization and for us three, because we are so close and good friends."

"Fans should have a chance to see a Marlin active," team president David Samson said. "It should have been a consideration. ... I think there should be a rule that every team should have an active player."

Jennings said it was too soon to predict when Gordon might rejoin the Marlins' lineup. The manager had no quarrel with Gordon's headfirst slide.

"When you're running down the line the way Dee does and you sniff a hit, your instincts are going to take over," Jennings said.

Gordon was sidelined two months in 2012 with a right thumb injury that required surgery. He said he knew immediately this injury wasn't as serious.

When does he hope to play again?