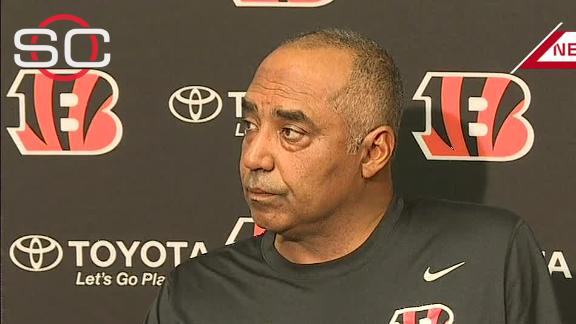 GLENDALE, Ariz. -- Bengalscoach Marvin Lewis emphatically disputed a penalty that gave theCardinalsa 32-yard field goal attempt to win Sunday night instead of a 47-yard kick, saying it was a "phantom call" he thought was "kind of ridiculous."

"I trust what our player did and said," Lewis said. "He's alerting a run and not anything to do with what they're saying.

"I don't see how they make that call at that point in the game like that. I trust our guy to be honest with me."

Peko, a 10-year veteran who has spent his entire career in Cincinnati with Lewis as his head coach, said he had no idea what the Cardinals were planning on doing on the play. But he wanted to get off the line quickly and into the backfield, he said.

Peko said his hope on the play was to dive quickly to the ground to figure out a way to disrupt Palmer's potential spike, or to get to him quickly had he tried to kneel down.

Two prominent Cardinals contended Peko did shout their snap counts and should have been penalized.

"It was real obvious," Cardinals quarterback Carson Palmer said of Peko's penalty. "The ref was right there. They obviously said the snap count, and that's a 15-yarder."

Added receiver Larry Fitzgerald: "I'm just glad it went in our favor because if it had been a false start and a 10-second runoff, it could have been a different outcome."

On the play, the Cardinals were trying to snap the ball to spike it before rushing the field goal unit on the field for a game-winning 47-yard try.

With a 10-second runoff, the clock would have ticked to all zeroes, and the teams would have gone to overtime without Chandler Catanzaro's field goal being attempted.

That attempt instead turned into a 32-yard chip shot, which Catanzaro made.

"I don't think I have ever seen that call, ever since I have been in the NFL," Peko said. "We had way too many penalties. That was the name of the game. We were fighting the refs and the Cardinals."

"When I was down in the bunch [formation], they were very loud and demonstrative with their shifts," Fitzgerald said. "The line shifts like that, it sounded like a cadence. I'm just glad that they finally caught it later in the game. Peko is a veteran. He has a lot of tricks up his sleeve."

Lewis, Bengals looking to regroup
Bengals coach Marvin Lewis discusses how penalties hurt his team in its loss to the Cardinals.