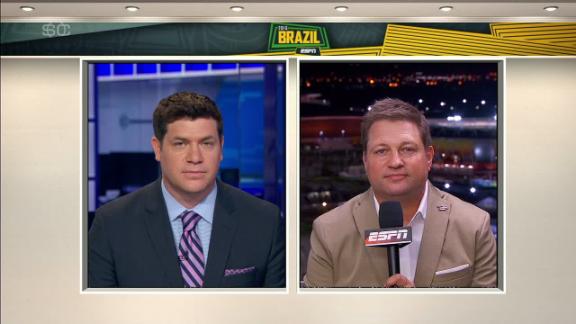 RIO DE JANEIRO -- The storylines will be plentiful Wednesday night when the two teams playing the best basketball so far at the Rio Olympics square off, but no subplot was generating more discussion on the eve of the Group A showdown between the United States and Australia than Kyrie Irving versus Matthew Dellavedova.

As recently as late June, Irving and Dellavedova were teammates celebrating their first NBA championship together with the Cleveland Cavaliers. But Dellavedova has since moved on in free agency to the Milwaukee Bucks and, coming off the finest game of his national team career, will now go head to head with Irving in the most anticipated game to date in the men's tournament.

"Delly's gonna compete," Irving said. "That's all he knows. I'm used to that already [from Cavaliers practices], so I don't see it as him being feisty or him being a pest. He's gonna do what Delly does."

Irving then tried to assert that he doesn't "think Delly is gonna rank as the all-time peskiest guy I've ever gone against," but Irving also didn't have a ready response when asked to name a defender he has found peskier.

Dellavedova enjoyed a near-perfect outing Monday in Australia's 95-80 victory over Serbia, totaling 23 points and 13 assists without one turnover. He and San Antonio Spurs guard Patty Mills combined for 49 points in the win over Serbia, which followed a 21-point trouncing Saturday of highly rated France to set the tone for what has been a men's tourney filled with upsets already -- excluding games featuring the United States.

The Americans have romped to a 2-0 start in Group A with wins over China and Venezuela by a combined 101 points. They frankly are in need of a push, having played only one game this summer out of seven so far against what could be considered a legitimate medal contender in Rio: last month's 37-point exhibition cruise in Las Vegas past aging Argentina.

"He's just a continuance of the Australian that we've played against in my 11 years," Team USA coach Mike Krzyzewski said of Dellavedova and his relentless style.

"They've always played, first of all, with great spirit and togetherness. As good as they are individually, they're greater as the sum of those parts."

But Krzyzewski said he is concerned most about Australia's pick-and-roll prowess and the passing ability of Bogut and Dellavedova. It's a much stronger team than the Australian squad Team USA routed by 33 points in the quarterfinals of the London Olympics in 2012, which Bogut missed because of an ankle injury.

"I'm sure Australia sees a lot of things that they can do against us because they're really good," Krzyzewski said. "Australian basketball is terrific. ... They can beat us. We know that, and we'll prepare accordingly.

"We know that they feel like they can beat us, and we understand that. I think it will be a really good game."

Said Irving: "When I saw the France [score], I was like, 'OK, this will be a great test.' We need to be beat up a little bit to prepared for what's ahead."

Team USA star Kevin Durant, however, scoffed at the notion that the game will narrow down to a duel between Irving and Dellavedova.

"Delly's playing well, but he's not getting into no one-on-one matchup [with Irving]," Durant said. "Kyrie's a dog. He's an animal. That's how he approaches the game."

Irving ultimately conceded that Dellavedova's physicality led to "a few rough days" on the Cavaliers' practice floor but said his fondness for Dellavedova is such that they'll be "bonded forever."

"It's been good for the both of us," Irving said of their three seasons together as teammates.