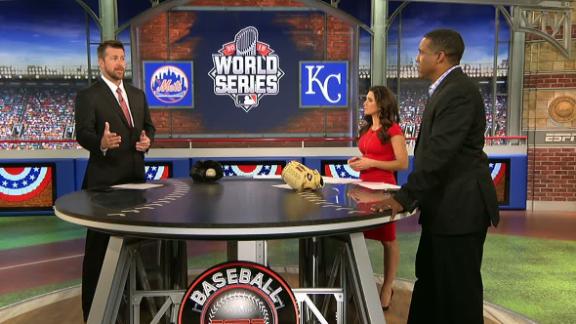 Then he turned to Game 1 starter Matt Harvey.

"You ready for it?" Collins asked.

Harvey looked at his manager and replied, "Damn right."

After Harvey starts Tuesday's opener against the Kansas City Royals, Jacob deGrom will handle Game 2 at Kauffman Stadium. Then, when the series shifts to New York next weekend, Noah Syndergaard will start Game 3 and Steven Matz will get Game 4.

Collins does not intend to use any of his starting pitchers on three days' rest in the World Series, so the rookie Syndergaard would handle a winner-take-all Game 7 at Kauffman Stadium. Still, Collins told Harvey to be ready to appear in relief in the finale if the Fall Classic goes the distance. Innings restrictions have been shelved given how close the Mets are to their first championship since 1986.

Collins opted for Harvey over deGrom in the opener for a couple of primary reasons:

Collins also preferred Syndergaard pitch at home rather than one of the first two games in Kansas City, even if that means starting Game 7 on the road.

"We like going into Kansas City with our Nos. 1 and 2 guys," Collins said. "Noah has pitched great at home. We thought that's a good mix. And obviously we think Steven Matz showed us, even though it hasn't been the depth into the games like he's going to do in the future, for four or five innings he's been pretty good."