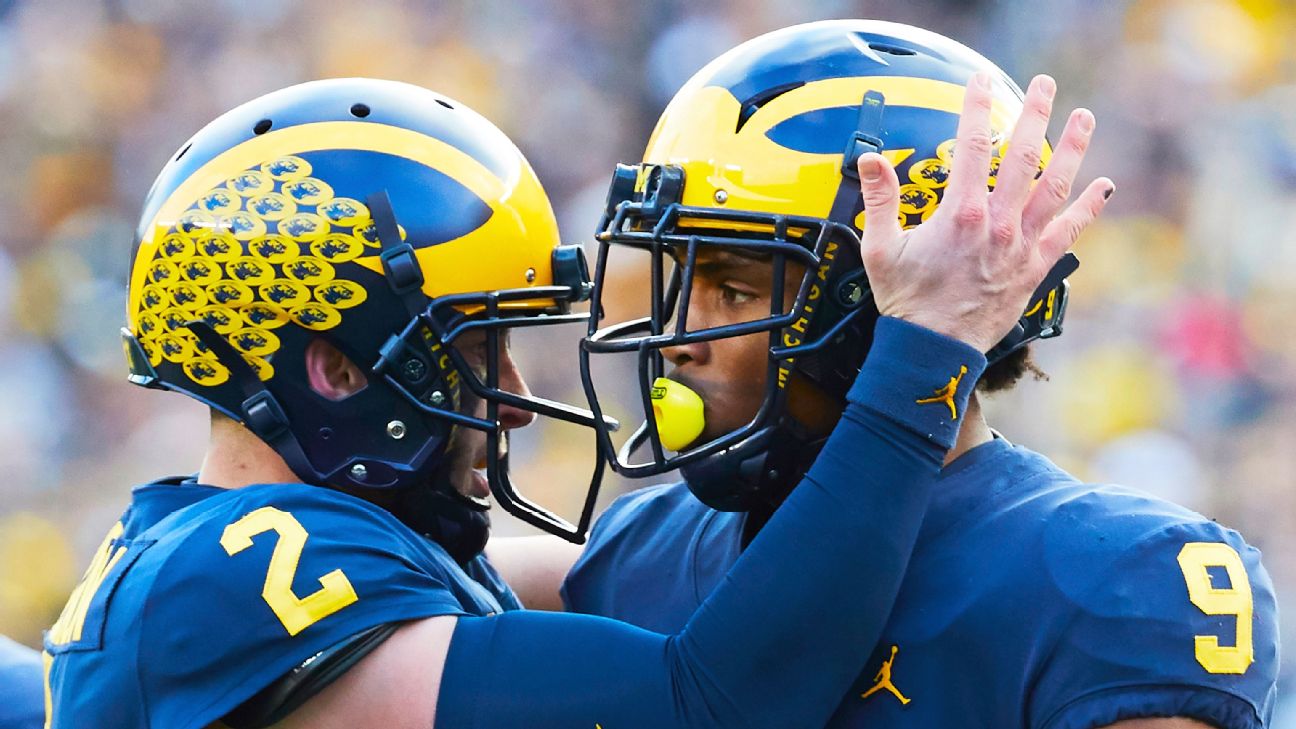 Michiganhas cracked the top four in the College Football Playoff rankings for the first time since Week 13 in 2016.

The top three -- No.1Alabama, No. 2Clemsonand No. 3Notre Dame-- continue to sit comfortably in the top four, though the Fighting Irish moved up one spot in this week's rankings, which were released Tuesday night.

The Wolverines resoundingly defeated Big Ten rival No. 20 Penn Statelast week to move from No. 5 to No. 4. LSUstumbled from No. 3 to No. 7 after being shut out at home against the dominant Crimson Tide.

"Their defense is extremely strong,'' selection committee chairman Rob Mullens said of LSU still being ranked No. 7 despite having two losses. "Their two losses come against No. 1 Alabama, on the road to Florida.''

According to ESPN's Football Power Index, there is just a 9 percent chance that the top four teams in the CFP rankings will all win out.

Georgiacontinues to wait patiently just outside the top four, having moved up from No. 6 to No. 5. The Bulldogs clinched the SEC East crown after defeating No. 11 Kentuckyon Saturday, and they will face Alabama in the conference championship game.

The stakes continue to be high in the Big Ten, with No. 10 Ohio Stateset for a Saturday showdown at No. 18 Michigan State. The Buckeyes will host Michigan in the regular-season finale Nov. 24.

No. 21 Iowais the final Big Ten representative in the CFP Top 25 this week.

The Big 12 continues to be led by No. 6 Oklahoma, whose only loss this season was to No. 19 Texas. In the season finale, the Sooners will square off againstWest Virginia,which jumped from No. 13 to No. 9 this week. Iowa Stateis ranked No. 22.

The SEC again has a conference-high seven teams in the CFP rankings this week. It is newly represented by No. 24 Auburnafter Texas A&M dropped out. Florida has lost two straight, to Georgia and Missouri, but is still hanging in at No. 15. Mississippi Statecomes in at No. 16, with a matchup against Alabama set for Saturday.

No. 13 Syracuse, No. 14 NC Stateand No. 17 Boston Collegerepresent the ACC, with the Eagles set to host Clemson on Saturday.

No. 8 Washington Stateand No. 25 Washingtonare ranked for the Pac-12.

Still-perfect UCF stayed even at No. 12 after outlasting Temple 52-40 last week.

Fresno Staterounded out the Group of 5 teams in this week's rankings, coming in at No. 23. 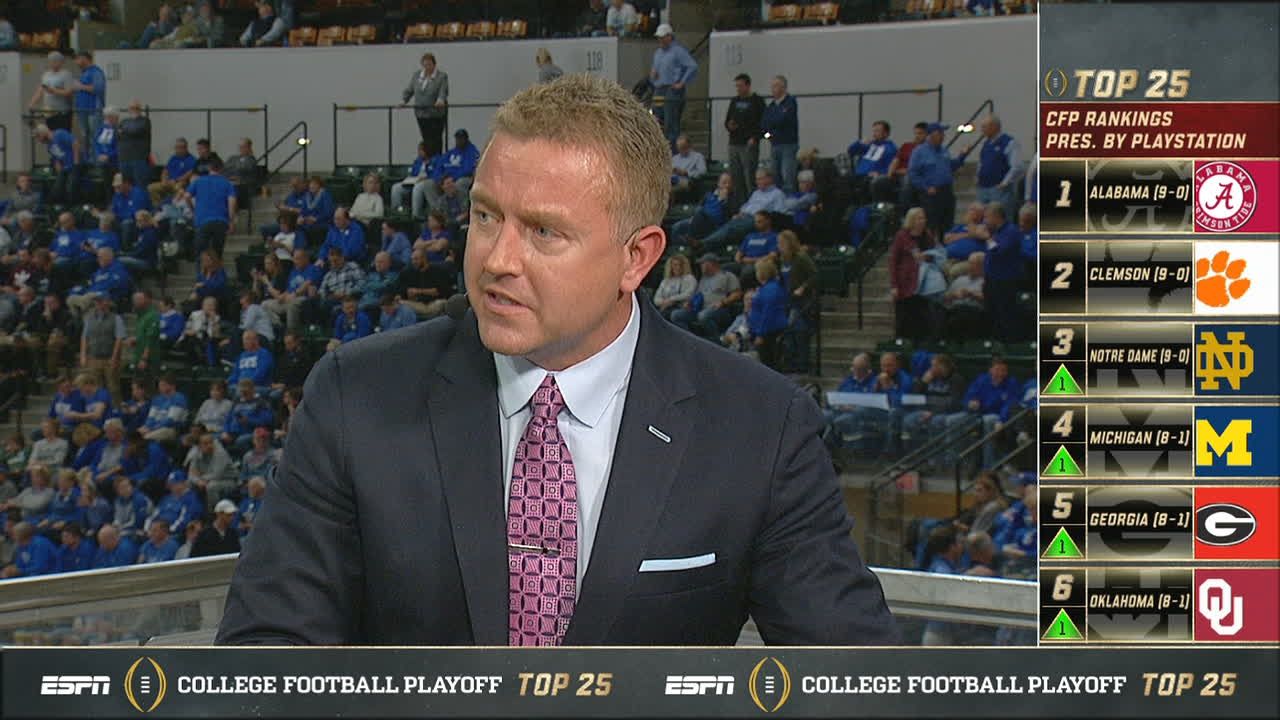 Herbstreit: 'Do not underestimate this Michigan team'
Kirk Herbstreit explains why the Wolverines are a championship-caliber team, commenting on their steady improvement throughout the year. 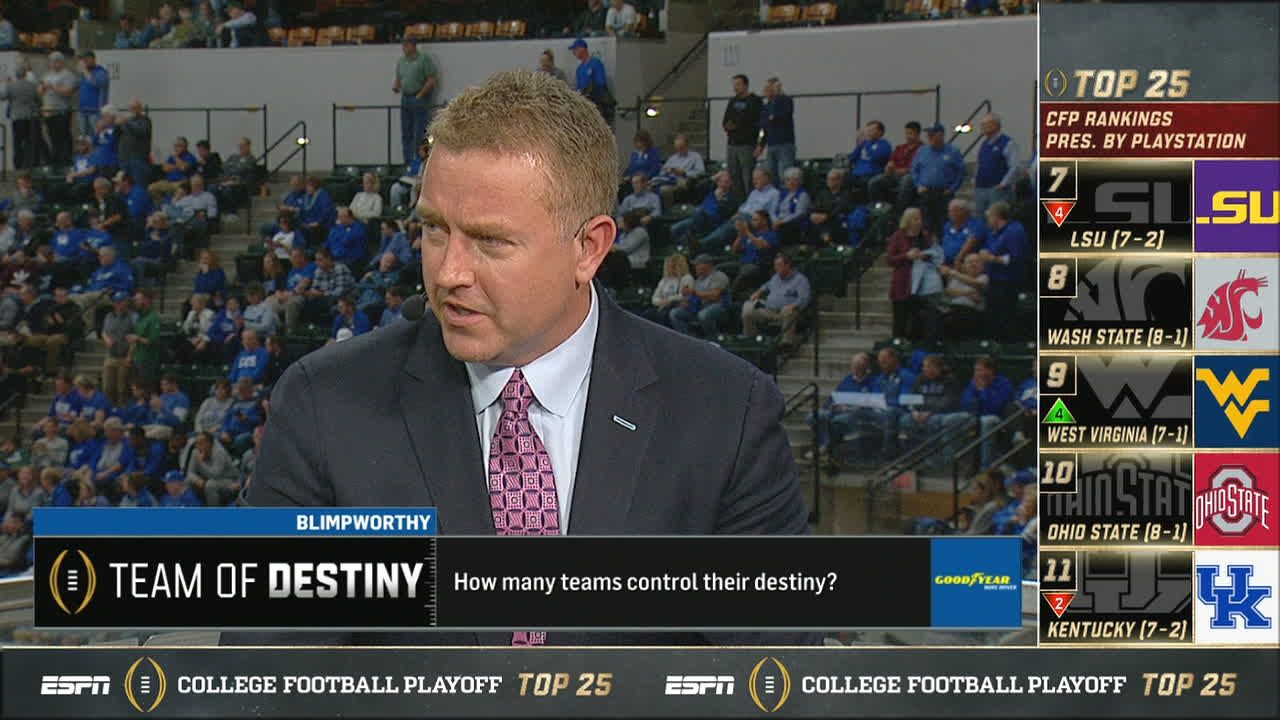 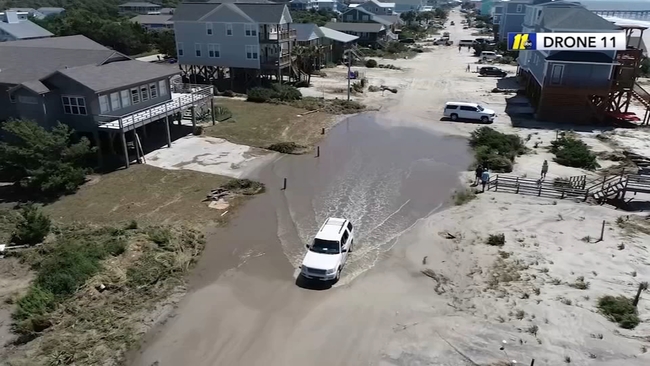