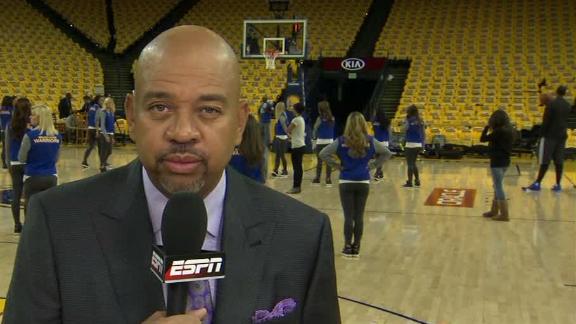 The NBA said in its Last Two Minute Report posted Wednesday thatSan Antoniowas on the wrong end of two incorrect non-calls down the stretch of Wednesday's Spurs-Thundergame, which Oklahoma City won95-91 for a 3-2 series lead.

The league acknowledged that San Antonio'sKawhi Leonard, attempting to intentionally foulOklahoma City'sRussell Westbrookwith the Spurs trailing by one, should have been whistled for the foulwith 8.7 seconds remaining.

The play in question began when Westbrook received an inbounds pass from Dion Waiters with 9.3 seconds left and was immediately spun around by Leonard. No foul was called, and Westbrook ended up sealing the victory with a three-point play with 6.3 seconds remaining, scoring on a layup while being fouled by LaMarcus Aldridge.

Leonard said after the game he "definitely fouled" Westbrook on the initial attempt, but Westbrook continued turning the corner and attacking the rim.

The league also determined that another incorrect call came with 54.7 seconds to go. The Spurs' Danny Greenwas called for a defensive foul when he fell into Kevin Durant's legs after appearing to be tripped by Steven Adams on an attempted screen. The NBA, in its Last 2 Minute report, says the foul was incorrectly called because Adams extended "his leg into Green's path, causing him to trip and fall into Durant."

The league's two admissions Wednesday came after the NBA acknowledged five incorrect non-calls in the final 13.5 seconds of Game 2, which Oklahoma City won 98-97.

Since March 2015, the NBA's "Last Two Minute Report" has provided a public report card of sorts on everything that happens in the final 2 minutes of games that were within five points or less. The NBA said it releases the reports in an effort to be transparent, and because it would get inquiries from teams and media about certain calls in close games anyway.

Game 6 is Thursday in Oklahoma City.