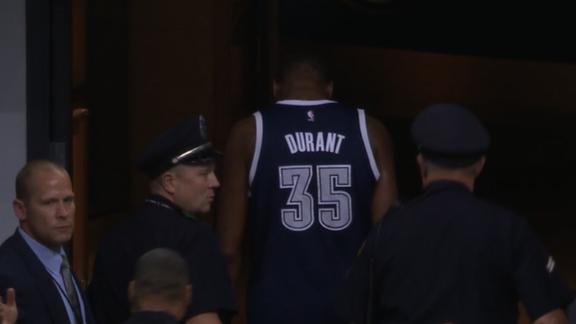 The NBA has finedOklahoma City's Russell Westbrook and Kevin Durant for violations in Game 4 of their Western Conference playoff series against theMavericks.

Westbrook was fined $25,000 on Sunday for directing inappropriate language at a fan in Dallas, after he was fouled by Salah Mejri on a drive to the basket during the Thunder's 119-108 victory Saturday.

Durant was penalized $15,000 for his flagrant foul 2 on Justin Anderson with 50 seconds left in the game. That led to his first career postseason ejection and second career ejection.

Durant said after the game that the refs' call was the right one, but he wasn't trying to hurt Anderson.

Further discipline for Durant, including a suspension, is possible. The NBA office reviews all flagrant 2 fouls.

The Thunder lead the series 3-1.