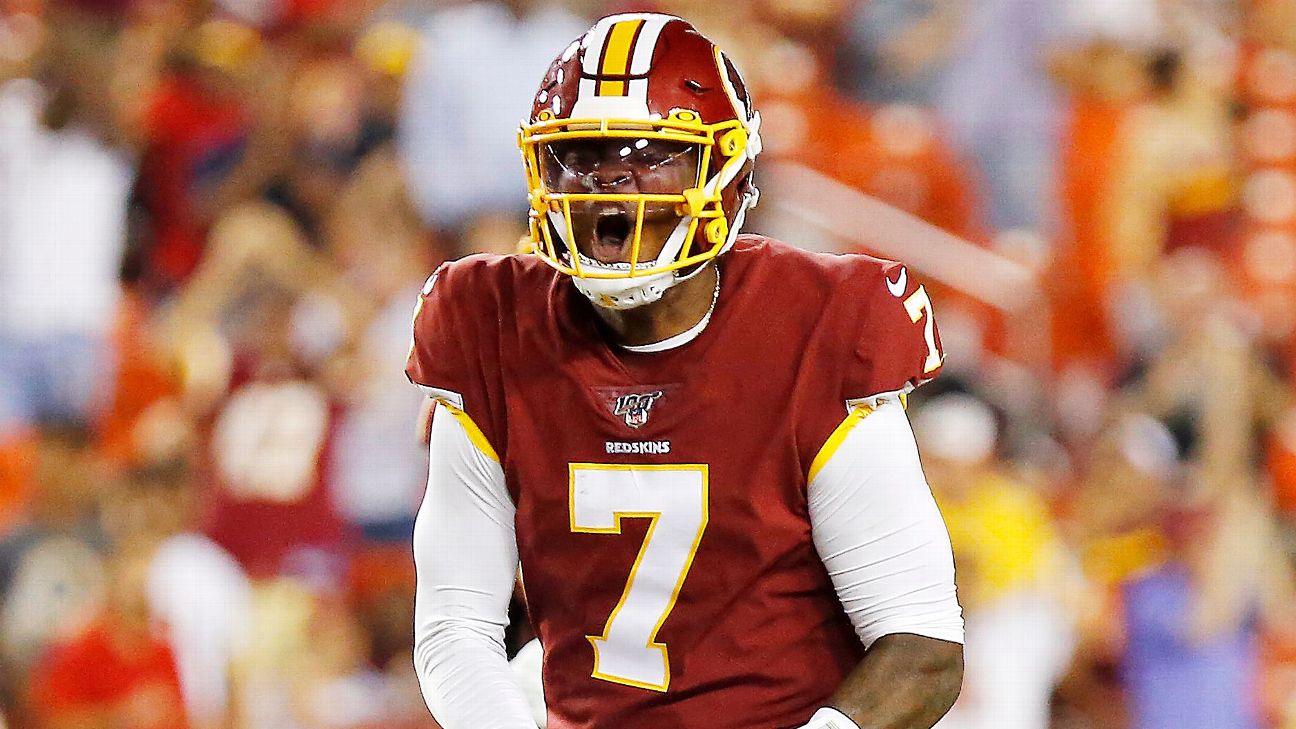 Rookie quarterbacks, at least the ones selected through the first three rounds of the 2019 NFL draft, have all seen valuable playing time this preseason and a few have flashed glimpses of what they're capable of -- including theWashington Redskins' Dwayne Haskins, New York Giants' Daniel Jones and Cincinnati Bengals' Ryan Finley.

As we enter the fourth and final preseason game, here's a roundup of how seven rookies have performed:

Preseason highlight: Early in the first quarter of the third preseason game against the Minnesota Vikings, Murray hit Damiere Byrd for a 33-yard gain on a beautifully thrown pass that led Byrd perfectly and was placed where only he could get it. The throw showed off Murray's arm strength and touch all in one play.

He said it: "As a rookie quarterback in the NFL, I don't know how ready you can be. You'll never be completely ready, I don't think, when it's your first game in the NFL, but he feels like he's in a good place talking to him." -- Cardinals coach Kliff Kingsbury

Play that had us shaking our heads: Murray didn't have that one jaw-dropping play everyone is still talking about. However, there was a play early in the first preseason game in which he scrambled right and hit wide receiver KeeSean Johnson with a perfect pass on the run. It was a glimpse of what Murray can do.

Regular-season focus should be on ...: What he can do in an up-tempo, full-scale offense in the NFL. The Cardinals have been running a vanilla offense without one of the most crucial pieces of the scheme: the no-huddle. A lot of eyes will be on how Murray will handle the speed of the game at full pace. Another thing to watch: How much he'll run in the NFL. -- Josh Weinfuss

Preseason highlight: There's a lot to work with here. How else do you have a 140.1 quarterback rating through three games? Still, nothing was more impressive than when he took a crushing blindside hit (and fumbled) on one play against the Bengals and followed it up by standing in the pocket on the very next snap and hitting fellow rookie Darius Slayton deep downfield on third-and-long. That's a rare sequence of events for any quarterback, let alone a rookie.

He said it: "You can ask me all you want about why I like him. I think it's time to start asking the people that didn't like him what they think, quite frankly." -- Giants coach Pat Shurmur

Play that had us shaking our heads: The fumbles are really the only thing to nitpick with Jones. He has three in nine series. Still, only one -- the sack/fumble where he held the ball loosely against the Bears -- left you wondering if ball security might be an issue.

Regular-season focus should be on ...: How does Jones learn and grow when he's not playing? Eli Manning is the starter. Jones will be waiting for his time. Owner John Mara said in an ideal world Jones might not play a snap, which would mean Manning is having a great season. How this actually plays out will be a constant area of intrigue and a focus no matter how many games the Giants win. -- Jordan Raanan

Preseason highlight: In the second preseason game, Haskins showed his potential on a 55-yard touchdown pass to Robert Davis. It wasn't just the throw; it was the entire play. Haskins' hard count got the safeties to rotate early. That tipped off their coverage and enabled Haskins to alert the line to a new protection and it prompted him to change his main target. Haskins also remained poised as a stunting linebacker rushed free.

He said it: "It's just going to happen naturally, organically. I had to come to terms with that. Now that I've been here for a little bit, it's like, man, it's a process. ... By no means am I settling. I know that I want to be great and I know I will be great. It's just that I have to be in a place where I know what I'm doing." -- Haskins

Play that had us shaking our heads: On his second interception of the preseason opener, Haskins' pass to tight end Matt Flanagan sailed over his head for an easy pick. Haskins anticipated Flanagan running a different route. But he forced a pass at a time he needed to be smarter. It came with one minute, 22 seconds left in the half on a first-and-10 from Cleveland's 47-yard line. He would have been wiser to check down on this play.

Regular-season focus should be on ...: Continuing to learn the playbook and all the nuances of the position. Haskins must also master the protection calls. Haskins has to learn how to call plays in the huddle. It's a long transition for Haskins, who started only one year in college. But by focusing on these areas, he can learn more before he's ready to then step on a field and learn by playing. And because he's a pocket passer -- and not someone who will threaten a defense with his legs -- the Redskins want him to grasp much more of the offense to maximize his value. -- John Keim

Preseason highlight: In what has largely been a bumpy ride for the rookie, Lock had moments in his most extended work of the preseason -- against Seattle -- when he showed some comfort in the transition from the offense he played in at Missouri to the Broncos' offense. Lock threw for 180 of his 254 passing yards against the Seahawks and had his only touchdown pass.

He said it: "It's going to be a little bit of time. He's sprained his thumb, and obviously with a quarterback your right thumb is pretty critical, so it'll be some time." -- Broncos coach Vic Fangio

Play that had us shaking our heads: It cost Lock the rest of the preseason when, on a scramble to avoid a sack just after halftime against the San Francisco 49ers, he was tackled and landed awkwardly on his right hand. Lock suffered ligament damage to his thumb and will miss the remainder of the preseason as well as the start of the regular season. It changed everything about what his rookie season might (or might not) become.

Regular-season focus should be on ...: Getting Lock healthy. He cannot participate in any on-field work because of his injury is to his throwing hand (no grip). It was already going to be a big ask for Lock to make enough progress to be Joe Flacco's backup in the regular season given the work he still needs to do on his footwork and throwing mechanics, but it is even a far bigger ask now that he can't practice. -- Jeff Legwold

Preseason highlight: You could have picked his touchdown pass to Elijah Holyfield in the preseason opener, but let's go with a fourth-and-2 pass to running back Reggie Bonnafon against New England. Grier was under intense pressure but got the ball out quickly for a 27-yard gain that led to a field goal. It showed good, quick decision-making to get the ball to a receiver on the back side with no coverage.

He said it: "He's going to help us someday." -- Panthers coach Ron Rivera

Play that had us shaking our heads: In the second quarter of the preseason game against Buffalo and in his debut in front of his hometown crowd at Charlotte's Bank of America Stadium, Grier threw a short pass to Torrey Smith that was picked off and returned 70 yards for a touchdown. It was the kind of bad decision and inconsistency that has kept him from passing Kyle Allen as Cam Newton's backup.

Regular-season focus should be on ...: Consistency and making quicker decisions. For every good pass Grier makes, he seems to make one or two bad ones. It's not that his decisions aren't necessarily good, it's that he doesn't make them fast enough and the defense is in position to make a play. -- David Newton

Preseason highlight: The fourth-round pick out of NC State had perfect starts to his first two preseason games. But in the second one, Finley showed a strong pocket presence as he went 8-for-8 on his first drive, converted two third downs and threw a 5-yard touchdown pass to rookie tight end Drew Sample. In his debut preseason, he has the second-highest completion percentage of all quarterbacks.

He said it: "Obviously, it's still a work in progress every day for me. I've gotta always be focused and 100 percent locked in because this game's not easy and it will humble you pretty quick." -- Finley

Play that had us shaking our heads: Finley's most notable mistake was a pass that sailed well over receiver Stanley Morgan and into the arms of Kansas City's Michael Hunter late in the opening preseason game. It was the only clean interception thrown by a Bengals quarterback this season. Starter Andy Dalton had a batted ball returned for a touchdown and Jeff Driskel had a Hail Mary intercepted.

Regular-season focus should be on ...: It might be an extension of Cincinnati's vanilla playcalling, but Finley will need to be able to extend the defense if he sees any regular-season action. Of 26 quarterbacks, Finley was 18th in the preseason in average pass length and 13th in average completion length. -- Ben Baby

Preseason highlight: A highlight for Stidham was the rookie QB leading a 99-yard touchdown drive in the fourth quarter of a Week 2 preseason win against the Titans and capping it off with a 23-yard TD pass to receiver Damoun Patterson. His play there showed a deft touch and pinpoint accuracy. That drive also highlighted the command and poise that Stidham has shown as a rookie, which has impressed his teammates.

He said it: "The most important thing for a quarterback is not to turn the ball over, make good decisions, and throw accurately. He did all those at times." -- Patriots coach Bill Belichick, following Stidham's preseason debut

Play that had us shaking our heads: In the Week 2 game vs. Tennessee, Stidham was fortunate to avoid two interceptions that both could have been returned for touchdowns, and he also lost a fumble on a scramble in a Week 3 preseason win against Carolina.

Regular-season focus should be on ...: Continued development behind the scenes. The preseason could not have unfolded much better for Stidham, whose willingness to step up in the face of pressure -- and ability to throw accurately down the field on those plays -- has been notable. While still early, this could be a Jimmy Garoppolo 2.0 type of situation for the Patriots. If Stidham has the chance to continue to develop without the pressure of the No. 1 or 2 spot on the depth chart, that would be a best-case scenario for both team and QB. -- Mike Reiss 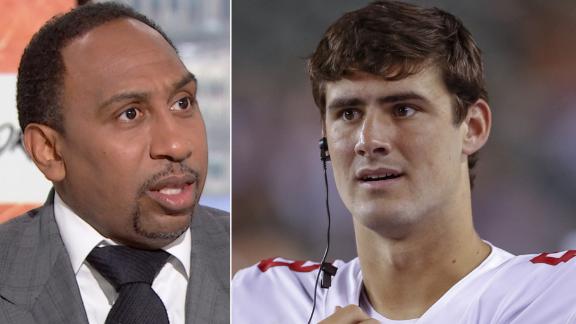