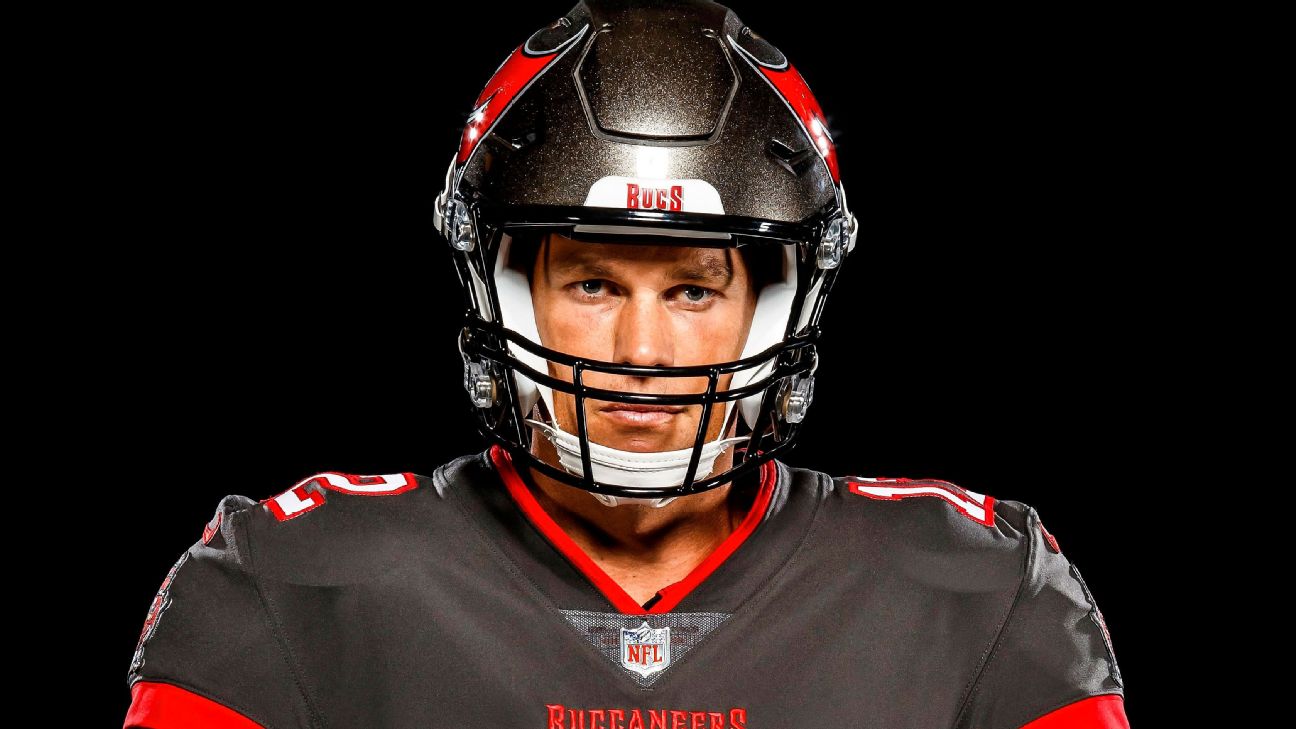 Tampa Bay Buccaneers quarterback Tom Brady thanked everyone for the birthday greetings as he turned 43 on Monday. Another NFL quarterback also had a birthday:Los Angeles ChargersQBTyrod Taylor turned 31.

Perhaps the biggest on-field news wasBen Roethlisbergerthrowing at training camp. The veteran quarterback has been out since Week 2 of the 2019 season because of an elbow injury.


The Carolina Panthers also had their first walk-through, as quarterback Teddy Bridgewater handed off to Christian McCaffrey for what promises to be the first of many times.

Top news of the day

For the first time in nearly a year, Roethlisberger threw a football with the Pittsburgh Steelers at Heinz Field. Roethlisberger participated in Monday's practice, and the team released a 44-second video of his throws and handoffs afterward.

Eagles coach Doug Pederson remains "extremely optimistic" about the prospects of playing a football season in 2020 even after contracting the coronavirus himself. "My confidence hasn't changed at all," Pederson said Monday in his first comments since testing positive. "I'm confident that we are going to play."

Beckham is not expected to opt out of the 2020 season, sources confirm to ESPN, despite comments published Monday by The Wall Street Journal from an interview conducted before the wide receiver reported to training camp and saw the team's facilities.

The Pro Bowl tight end has reached agreement on an incentive-laden, one-year deal with the San Francisco 49ers, sources told ESPN's Adam Schefter. Reed is 30 and has a history of concussions, but when healthy -- as he is now -- he is one of the game's elite tight ends.


James tweeted a statement Monday, saying it was "tough, but the right decision" and citing "too much unknown about this virus & about plans handling it going forward." The 28-year-old tackle was entering the second year of a four-year, $51 million deal with Denver. He was limited to three games last season because of torn ligaments in his knee.

Jaguars coach Doug Marrone says he doesn't know why his team has had more players placed on the reserve/COVID-19 list than any other NFL franchise. They're following the protocols set forth by the NFL and NFLPA, wearing the tracing devices and working out in smaller groups, he said. But as of Monday morning the Jaguars have had 12 players placed on the reserve/COVID-19 list since tracking began last week, including starting quarterback Gardner Minshew.

Quotes of the day

Cam Newton posted a video to his YouTube channel titled "All We Know is Work!!" And while we know coach Bill Belichick doesn't do "Instachat" or "Snapface," this is the type of social-media post even he can get behind. Newton and his Patriots teammates began the strength and conditioning portion of training camp Monday. Through the first full week of testing, the team hasn't placed any player on the COVID-19 list, although eight players have opted out of the season. -- Mike Reiss

Ravens running back Mark Ingram said his mindset hasn't changed even though he is 30 and faces increased competition from rookie second-round pick J.K. Dobbins. "The coaches will decide how to rotate us and play us all," Ingram said. "All I do is work my butt off. I compete my butt off no matter where I'm at and who's in my running back room. That's just the bottom line." Ingram tied a Ravens record with 15 total touchdowns last season and finished 14th in the NFL with 1,018 yards rushing. But the Ravens can create $5 million in salary cap room by cutting Ingram next offseason, which heightens the pressure on the three-time Pro Bowl back. -- Jamison Hensley

Dolphins coach Brian Flores says Preston Williams, who tore his ACL in November, has been cleared for football activity. This is a good sign for his Week 1 availability. Williams, an undrafted rookie free agent last season, led all rookie receivers in targets and tied for the lead in receptions in Weeks 1-9. He immediately became a starter, totaling 32 catches for 428 yards and three touchdowns in eight games. Williams is a good fantasy football sleeper option. -- Cameron Wolfe

The Broncos have already shown the players how training camp will be different. As the players began their first full team conditioning workouts Sunday and Monday, they used the playing field inside the team's indoor practice complex as a team meeting room so the players could have enough distance between them. Among the items covered in the first meetings were how players can recognize symptoms of COVID-19, the procedures for a player who tests positive for the virus, and how the locker rooms, weight room and cafeteria would operate with the limits on the number of players in those spaces. -- Jeff Legwold

Bills safety Jordan Poyer describes the changes inside the team's facility in Orchard Park. First, players arrive and are tested for COVID-19, then receive wrist-worn devices that track how close they are to other individuals. Each locker has an empty locker next to it and the cafeteria is on the ground floor with tables outside. Poyer also said the team's meetings have been held on the indoor practice field and players lined up five feet apart while running this morning. -- Marcel Louis-Jacques

The Panthers were able to get on the field for their first walk-through on Monday. Bridgewater spoke to the media on Monday as well, saying he was "honored'' to be following in the footsteps of Cam Newton. Regarding all the offensive talent on the Panthers and on the other NFC South teams this season, Bridgewater said, "At the end of the day, you have to prove it on the field." One thing Bridgewater has proved is his ability to lead. He said he already feels like teammates are feeding off his energy and "I'm feeding off theirs.'' -- David Newton

Safety Kevin Byard became a father last year and his wife is pregnant with their second child. Byard said he and his wife discussed opting out. "We decided as a family that I am going to play this year. If I felt that I was going to opt out, I probably would have never come to the building. I feel like the Titans are trying to do their best to make sure everyone is safe. We all have to take the precautions as far as washing your hands and wearing a mask." Tackle Taylor Lewan has a toddler and his wife recently had a baby. He hasn't considered opting out. "I have a daughter that is 15 days old today," Lewan said. "We are one of those high-risk situations so I'm trying to be as smart as possible. You have to take care of your own stuff. There's a safety aspect that comes into this thing. It's hard but this is my job and what I wanted to do my entire life. It was never a thought for me to opt out or anything like that." -- Turron Davenport

The Browns placed third-string QB Garrett Gilbert on the COVID-19 list Monday. Going into training camp, coach Kevin Stefanski noted that he didn't plan to separate the QBs in different meeting rooms, saying that, "the quarterbacks in particular are spread out way more than six feet. ... We have four quarterbacks on our roster, and the meeting room they are in can fit way more than four players." With one of his QBs already on the COVID list, it will be interesting to see if Stefanski sticks with that plan. Obviously, starter Baker Mayfield going on the list, as well, would significantly hamper the Browns as they attempt to install a new offense despite a limited offseason and training camp. -- Jake Trotter

The 49ers opened training camp on Monday with all eyes on the tight end position. The Niners signed Jordan Reed to a one-year deal with the goal of making him the type of speedy complement to George Kittle capable of opening up a new look for the offense with multiple tight ends on the field. Kittle's contract remains one of the most important storylines of this camp. Coach Kyle Shanahan and general manager John Lynch expressed optimism something will be worked out soon enough. "I feel really good about this going forward and I feel really optimistic about it," Shanahan said. "So, hopefully something will happen sooner than later. Not too concerned about it, though." Kittle is entering the final year of his rookie deal, but Lynch said no firm deadline is in place to complete a new contract. Regardless, it's a good sign for the Niners that Kittle is in camp and the sides continue to work toward the same goal. -- Nick Wagoner

Bengals right tackle Jonah Williams was photographed coming into the team facilities on Monday looking in very good shape. That should be a good sign for a team that desperately needs long-term stability at right tackle. The Bengals drafted Williams in the first round of the 2019 draft but were without the Alabama product all season while he recovered from shoulder surgery. -- Ben Baby

The strength of Washington's team will be the defensive line, and it's not just because of the starters. It's conceivable that players such as Ryan Kerrigan and either Daron Payne, Matt Ioannidis or Jonathan Allen will come off the bench. Tim Settle is another who provides depth and will be a help off the bench; as defensive line coach Sam Mills said, "He's a talented, talented man who has a bright future." For the first time in a while Washington has legitimate depth here and Mills will consistently be able to rotate in fresh bodies. If Washington is going to make any noise, this group must produce, and it won't be just because of rookie Chase Young. It'll stem from a talented and deep group. -- John Keim

The Falcons were back on the field Monday for some conditioning work, giving folks their first glimpse of new running backTodd Gurley. The former Ram, clad in black gear with white sleeves while wearing a light blue face mask, made a nifty, one-handed catch coming out of the backfield in one drill. He seemed to have his acceleration even though there are concerns about his durability based on left knee issues from the past. "Just trying to work my mind and work my body back into shape,'' Gurley said afterward. He teased the media for not acknowledging his 26th birthday, then Gurley gave a shout-out to others who share the same birthday such as teammates Dante Fowler Jr. and Younghoe Koo and 43-year-old Tom Brady, now playing in the NFC South with the Tampa Bay Bucs. -- Vaughn McClure 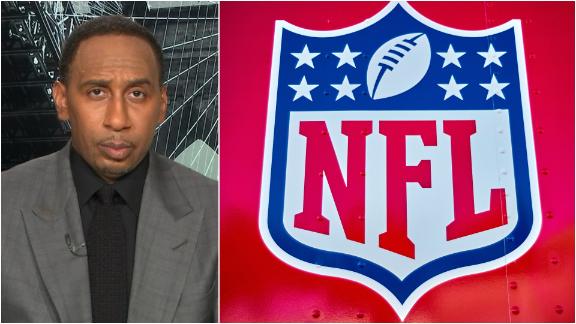 Why Stephen A. isn't concerned about the NFL season
Stephen A. Smith explains why he expects there to be an NFL season in 2020 despite concerns over the coronavirus. 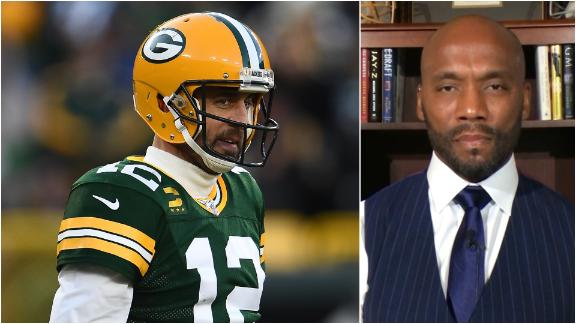 What is Rodgers' future in Green Bay?
Louis Riddick reacts to Matt LaFleur's comments on how long Aaron Rodgers will continue his career as the Packers' quarterback. 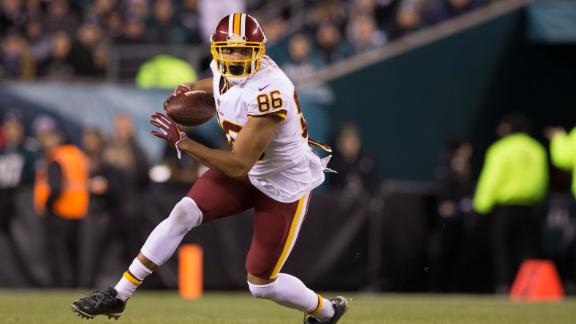