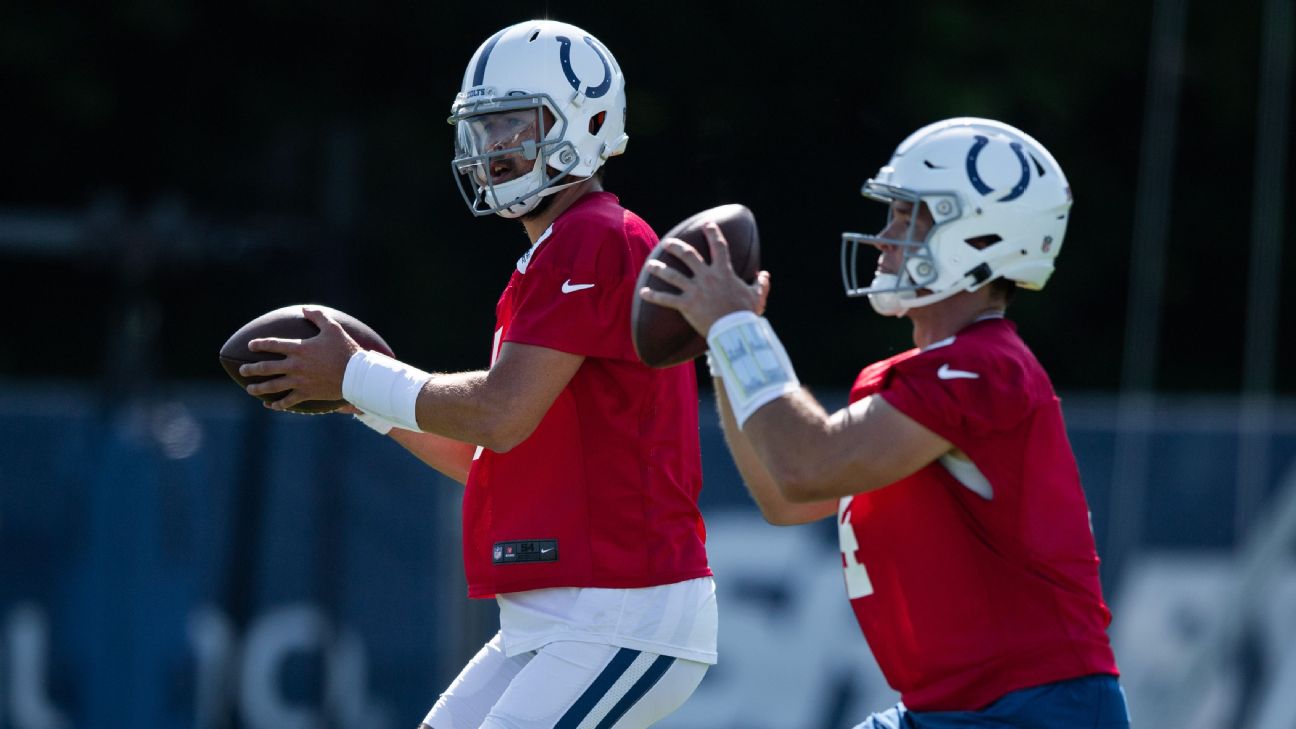 The first full slate of NFL preseason games is nearing, starting with two on Thursday night. As 2021 training camps continued on Tuesday, word about who will play -- and who will sit out -- in those games started to spread.

Don't expect to see Deshaun Watson or Aaron Rodgers suit up this weekend. Meanwhile, in Indianapolis, the quarterback race while Carson Wentz is sidelined is getting more interesting.


Elsewhere, cornerbackPatrick Robinson's retirement leaves the Saints in a pickle, Panthers QBSam Darnold had a shaky day and Ravens first-rounderRashod Bateman limped to the locker room with what appeared to be an upper leg injury.

Here's what you need to know from camps across the league:

Top NFL news of the day

Rookie Sam Ehlinger has closed the gap against Jacob Eason to be the team's starting quarterback if Carson Wentz is not ready for the start of the regular season.

Ehlinger, who was selected in the sixth round of this year's draft, split first-team practice snaps with Eason in practice Tuesday, and he is expected to do so in joint practices against the Carolina Pantherson Thursday and Friday.

QBJordan Love will start on Saturday against the Texans. Coach Matt LaFleur said Tuesday that quarterback Aaron Rodgers will "most likely not" play at all in the preseason. That likely has little or nothing to do with Rodgers' offseason in which he voiced concerns about the organization and skipped the entire spring program.


Deshaun Watson is "unlikely to play" in the Texans' preseason opener against the Green Bay Packers "based on the limited reps he's had in practice," coach David Culley said Tuesday.

Not a great day for starting QB Sam Darnold, who gave up a pick to safety Jeremy Chinn on a throw to a wide-open Dan Arnold. He also had several overthrows on situational-type drills. His first big test comes on Thursday and Friday in joint practices against the Colts when he will have to react to new players and a different defense. How Darnold performs likely will determine how much he plays in Sunday's preseason opener.-- David Newton

It's a good thing for the Seahawks that quarterbacks don't get hit in practice because they have rookie sixth-round pick Stone Forsythe protecting Russell Wilson's blind side. That's the result of injuries to three of their backup left tackles (Jamarco Jones, Cedric Ogbuehi, Tommy Champion) as well as starter Duane Brown's continued hold-in. Forsythe handled himself well in Sunday's mock game and got some help via Seattle's quick passing game. Coach Pete Carroll said Ogbuehi, last year's backup left tackle, is likely going to miss a couple weeks with a biceps injury. It doesn't sound like Jones (back spams) will be as long. But it's not clear if Brown will begin practicing anytime soon. Carroll gave a vague answer when asked about the possibility of an extension for Brown: "Nothing new is happening with that at this point."-- Brady Henderson

The Patriots held a late-afternoon practice inside Gillette Stadium on Tuesday that came after two days of full-pads practices. Rookie QB Mac Jones continues to build momentum; he had finished Monday's practice with a beautiful back-shoulder TD pass in the two-minute drill.-- Mike Reiss

On a day reserved mostly for game preparation, end Montez Sweat caused a stir by saying he and fellow end Chase Young talk often about setting records. Sweat says he's eyeing the NFL combined sack record of 39, set in 1989 by Minnesota's Keith Millard and Chris Doleman. Sweat and Young combined for 16.5 last season, and while they have looked good in camp, that would require a massive leap this season. But it's also indicative of the confidence they're playing with; Sweat has been noticeably more vocal with trash talking this summer.-- John Keim

The Bears held a lighter workout on Tuesday before the Miami Dolphins arrive for two days of joint practices. "We're talking all the time because we want to make sure that this thing goes the right way," coach Matt Nagy said of working with the Dolphins' coaching staff. "You always have the rules of engagement. Guys get juiced up and go. You want to eliminate fighting." -- Jeff Dickerson

Defensive end Carl Lawson continued his torrid camp, recording another three "sacks" in 11-on-11 periods. Quite simply, he has been the best player on the field from Day 1. The Jets, in a forever search for a quality edge rusher, might have solved the pass-rush problem with Lawson, formerly of the Bengals.-- Rich Cimini

Taysom Hill threw one of his best passes of camp Tuesday to cap a two-minute drill -- a TD strike up the seam to tight endJuwan Johnson, who went up high over a linebacker to make a great catch. The competition between Hill and Jameis Winston remains tight as they head toward Saturday's preseason opener at Baltimore. Johnson, meanwhile, has been a camp standout after originally joining the team as an undrafted receiver last year and switching positions this offseason.-- Mike Triplett

Meanwhile, Pro Bowl cornerback Marlon Humphrey was the most dominant player on the field for the Ravens, breaking up four straight passes. Humphrey got his hand on passes for James Proche, Sammy Watkins and Jaylon Moore (twice). Secondary coach Chris Hewitt called Humphrey an NFL Defensive Player of the Year candidate. Safety DeShon Elliott said, "You're an idiot to try Marlo four times. What is wrong with you?"-- Jamison Hensley

NFL quotes of the day

Best of the rest from across the league 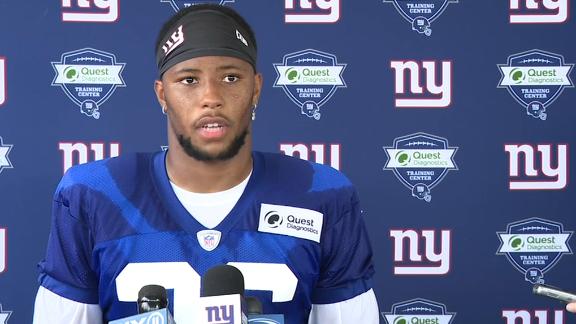