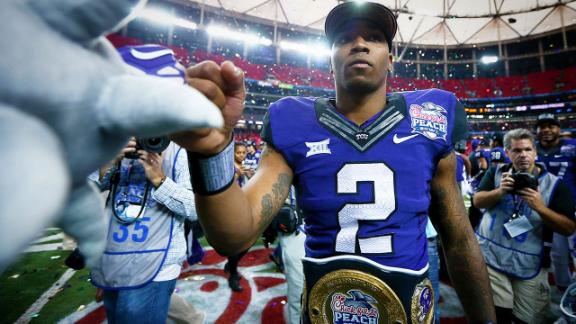 A day after winning the first College Football Playoff, Ohio State was anointed the favorite to win next year's national title in Las Vegas.

The Westgate SuperBook on Tuesday installed the Buckeyes as 9-2 favorites to win the 2016 College Football Playoff. TCU is next at 7-1, followed by Alabama at 8-1.

Ohio State returns a bevy of talent from a squad that defeated Oregon42-20 on Monday, including sophomore running back Ezekiel Elliott, who rushed for 246 yards and four touchdowns, and potentially all three of its quarterbacks -- Braxton Miller, J.T. Barrett and Cardale Jones.

The Buckeyes were considered top-tier contenders in Las Vegas heading into the 2014 season, before Miller was lost for the season with a shoulder injury in August. After a Week 2 loss to Virginia Tech at home, Ohio State's national championship odds dropped all the way to 100-1 at William Hill.

But there were still believers in the Buckeyes; more bets were placed on Ohio State to win the national championship at the SuperBook than any other team.

Like the Buckeyes, TCU is expected to return almost all of its key starters from this season's 12-1 team. Other notables includeUSCat 12-1, Oklahoma at 12-1, Oregon at 20-1 and Jim Harbaugh's Michigan at 100-1.

"Harbaugh's coaching made Michigan way, way lower," Ed Salmons, SuperBook head football oddsmaker, said. "I would have had them at 300-1, if he weren't there."