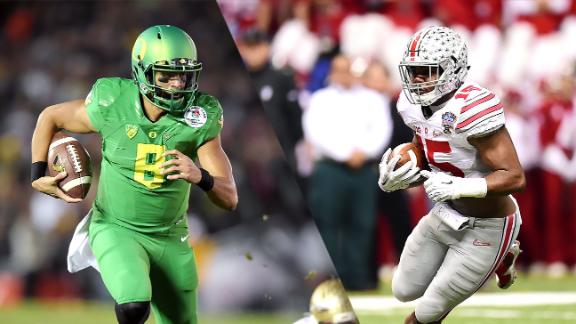 The excitement generated by the first College Football Playoff has bubbled over to the betting window.

Heading into game day, the College Football Playoff National Championship presented by AT&T between Oregonand Ohio Statewas on pace to be the most heavily bet college football game ever at William Hill's Nevada sports book.

William Hill director of trading Nick Bogdanovich estimates the Oregon-Ohio State game will attract "20 percent" of the amount wagered on the Super Bowl at his book.

A record $119.4 million was bet on the Super Bowl last year at Nevada sports books.

"It's as big as any college football game that I can remember," Bogdanovich, a 28-year Vegas veteran, said of the handle.

Some of the increase can be attributed to William Hill's growth. The prominent UK bookmaker received its Nevada gaming license in 2012 and now operates sports books at 104 locations state-wide. But other Nevada books also reported heavy handle on Ducks and Buckeyes.

"It'll be easily as big as one of these games we've got going on today," MGM vice president of race and sports Jay Rood said, referring to Sunday's NFL playoff games. "We'll be into the seven figures (on Ohio State-Oregon)."

Books are expecting "50-60 percent" of bets to be placed Monday with the bulk of the action showing up in the hours leading up to kickoff.

"To have as much as we've written before day of the game is pretty impressive," said Ed Salmons, head football oddsmaker at the Westgate SuperBook.

John Avello, executive director of the Wynn Race and Sports Book, said as of Sunday night the biggest bets he had taken on the championship game were in the five-figure range.

SportsInsights.com, a sports betting analytics site, reported Sunday that 54,981 bets had been placed on the game at the seven online sports books it tracks.

The semifinal games between Florida State and Oregon, and Ohio State and Alabama each attracted more than 100,000 bets.

Oregon was favored by 6 over the Buckeyes at most books heading into game day. The Ducks opened as 7-point favorites, but the line had dropped to as low as minus-5 during the week. The point spread was growing back to Oregon late Sunday.

Bogdanovich said William Hill had taken twice as much money on Oregon than Ohio State, heading into game day.