Pacers rest all starters vs. Bucks 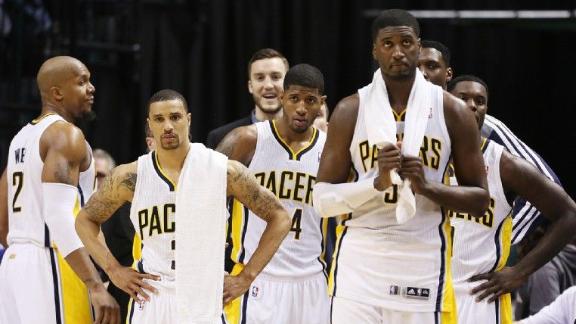 MILWAUKEE -- The slumping Indiana Pacers will rest all five starters Wednesday night against Milwaukee, even as they chase the No. 1 seed in the Eastern Conference.

Coach Frank Vogel told reporters at the Pacers' shootaround that none of his top five had taken part and they would all sit out the game. He said it's a chance for Paul George, David West, Roy Hibbert, George Hill and Lance Stephenson to get some minor injuries healed, and for his reserves to play extended minutes.

"We're going out to try to win this basketball game," Vogel said. "We still have our sights on the No. 1 seed, but the most important thing for our team is fixing our team, and this is the plan to try to do that."

Indiana is stumbling to the finish after leading the East most of the season. The Pacers have lost five of their last six games, and Vogel said he thought they looked tired after a 107-88 home loss to Atlanta on Sunday, when Indiana was held to a franchise-low 23 points in the first half.

Still, the Pacers were just a half-game behind Miami, which played at Memphis on Wednesday. The Pacers visit the Heat on Friday.

"I'm willing to accept that if a move like this leads us to a No. 2 seed, that's OK," Vogel said before the game.

The benched starters took part in an hourlong workout Wednesday that consisted of shooting and conditioning, Vogel said in speaking with reporters shortly before tipoff.

He reiterated the reasons for the move and insisted that none of the usual starters would participate in the game against the Bucks under any circumstance. Four of the five players were expected to dress for the game. The other, Hibbert, is inactive.

Vogel said he ran the decision by the NBA league office, which he said found no problem with the move. However, Vogel said he's unaware of an NBA team ever benching all of its normal starters for a game.

Vogel said the starters would return to practice Thursday and play at Miami, though some bench guys could rest that night.

"The thought process behind all five guys is if you sit one or two guys per game, then nobody ever finds a rhythm," Vogel said.

Indiana has prioritized the top seed all season, so it would have home-court advantage against Miami if the teams meet again in the Eastern Conference finals. But with his team struggling offensively, Vogel decided on the rest plan against the NBA-worst Bucks, who have lost five in a row.

Pacers players wouldn't talk about the move in the locker room before the game.

Milwaukee coach Larry Drew said neither he nor his players felt they were being disrespected by the decision.

"They are just making sure they don't limp into the playoffs. That's the last thing any team would want to do," Drew said.

"Our focus these last five games is to be competitive, regardless of who we play against and who they play. That message would be no different if they were playing their starters."