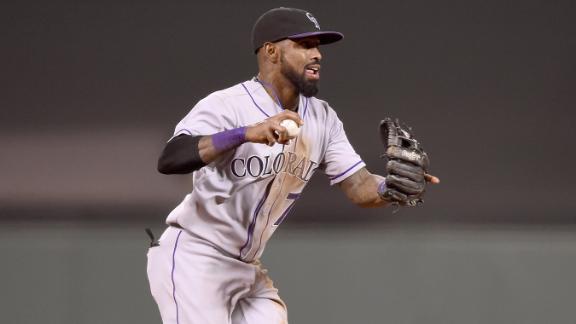 "The complaining witness, Mr. Reyes' wife, is what we call an uncooperative witness," Glen said. "At this point, I have no other avenue for prosecution."

Reyes was scheduled to go to trial April 4. He pleaded not guilty to abusing a family or household member. David Sereno, his Maui defense attorney, couldn't immediately be reached for comment.

A source with knowledge of the case told ESPN's Pedro Gomez that just because the prosecutor's office won't press charges does not mean MLB will let the case drop. The source told Gomez that Reyes' situation is similar to that of New York Yankees closer Aroldis Chapman, where the Broward County District Attorney did not file charges but MLB still handed down a 30-game suspension.

A source told Gomez that Reyes will likely be suspended and that any punishment might not be handed down by the time the Rockies' season starts on Monday. Reyes has not had any spring training action and likely will report to the Rockies' facility in Scottsdale, Arizona for extended spring training, though a time frame for that is unknown.

MLB declined to comment on prosecutors' intent to drop the charge against him but said in a statement Reyes "remains on administrative leave until the commissioner completes his investigation and imposes any discipline."Rockies spokesman Warren Miller said the team had no immediate comment. The team is expected to wait until MLB decides on any discipline before addressing the issue.

Administrative leave is paid suspension, although Reyes will start accruing his $22 million salary Sunday, the day the MLB season opens. If the discipline becomes an unpaid suspension, he has the right to offset the time served against the penalty but must repay any salary he received during the paid suspension.

The former New York Mets shortstop was arrested Oct. 31 at the Wailea Four Seasons Resort. According to a recording of a 911 call released by police, a hotel security guard reported the woman had injuries to her leg and scratches on her neck.

Reyes was released after posting $1,000 bail and was ordered to stay away from his wife for three days.

Glen will ask for the case to be dropped without prejudice, meaning she'll have about two years from the date of the alleged offense to refile charges if Reyes' wife eventually cooperates.

"For misdemeanor offenses, we cannot force an uncooperative witness to come back," Glen said.

He was placed on paid leave under Major League Baseball's new domestic violence policy pending completion of the criminal proceedings.

Reyes, who is owed $56 million through 2017, was acquired by the Rockies in the trade that sent Troy Tulowitzki to the Toronto Blue Jays.

When Reyes returns to the Rockies this season, there's no guarantee he will be the team's starting shortstop. ProspectTrevor Storywas named the winner of the 2016 Abby Greer Award as the team's spring training MVPafter batting .378 with six home runs and 13 RBIs in 45 at-bats entering Wednesday. Story, who hit 20 homers with 80 RBIs in two stops in the minors last season, was named the Rockies' Opening Day shortstop by manager Walt Weiss on Tuesday.