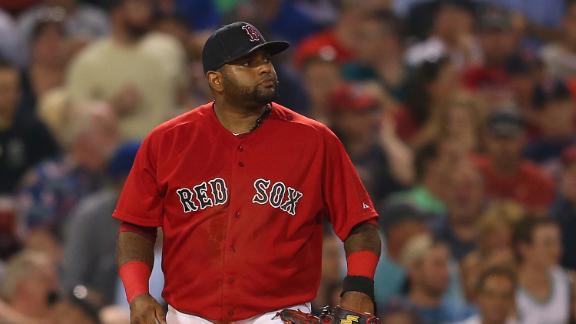 ATLANTA -- Boston Red Sox third baseman Pablo Sandoval was benched for Boston's 5-2 win Thursday by manager John Farrell after admitting that during Wednesday night's 5-2 loss to Atlanta he used his cellphone to click "like" on a woman's photographs that appeared in his Instagram feed.

A blogger for Barstool Sports was the first to tweet Wednesday that he had noticed the in-game social media activity from Sandoval.

Sandoval said he used his cellphone after returning to the clubhouse to use the bathroom.

He said he met with Farrell and general manager Ben Cherington and apologized but was not fined.

"I know I f---ed up," Sandoval said Thursday. "I made a mistake [Wednesday]. I learned from that. I'm a human being, I made a mistake, so I apologize to my teammates, to the team, to the organization, the fans support.

"It was the first time, so I take the mistake and learn from that. I move forward to try not to do it anymore. It's one thing I let my teammates down. Ain't going to happen no more, so I learned from that."

Sandoval said he was aware of the team rule against using cellphones during games and acknowledged that the incident was why he was not in Thursday's lineup.

"I take the punishment," he said. "When you grow up, you learn from a lot of things. You grow up every single day in your life. You learn from that.

"It's their decision to make. I broke the team rules. I should be punished."

Asked if he had been fined, Sandoval said "not yet" and said he would be in the lineup Friday.

"It's a one-day thing. So I move forward to tomorrow to be on the field and help my team to win games," he said.

Said Farrell: "From our standpoint he's benched tonight. I don't know of any further discipline at this point in time or if there's anything else coming down from MLB, but we've also handled some other things internally on the matter."

MLB spokesman Michael Teevan said the situation is under review.Sandoval was in violation of MLB Standards and On-Field Operations Regulations, which covers player use of cellphones. It reads, in part, that: "Uniformed personnel, clubhouse staff and equipment staff are prohibited from using cellular phones, including any type of portable or mobile phone, laptop, texting device or similar portable equipment while on the bench, in the bullpens or on the playing field once batting practice has begun; and are prohibited from using such devices in the clubhouse within 30 minutes of the start of a game."

"John addressed that I don't have anything to add," said Cherington. "Something happened yesterday. Pablo's being punished by not playing tonight. Other than that, that's something John handles inside the clubhouse."

The incident comes at a time when the Sox have already been under fire for their poor performance this season. They have lost eight of their last 10 games to fall 10 games under .500, nine games behind the first-place Tampa Bay Rays in the American League East. Sandoval recently went through an 18-game stretch in which he batted .148 with one extra-base hit, though he has been hot of late, batting .452 during an eight-game hitting streak.

He also has been disappointing defensively, making nine errors, including two games in which he made two errors apiece, the second error coming in the ninth inning in each instance and leading to a Sox loss.

For some, this will conjure memories of the "fried chicken and beer" fiasco in 2011, when some players were eating chicken and drinking beer in the clubhouse in the season's final month, one in which the Sox went 7-20 and missed the playoffs by a game. Manager Terry Francona was fired after that season.

How to handle Pablo Sandoval situation
The Baseball Tonight crew discusses how the Red Sox should react to Pablo Sandoval's use of a cellphone during Wednesday's game.