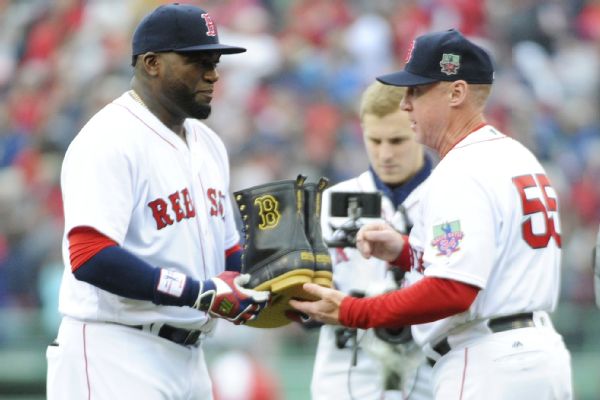 BOSTON -- Today, tomorrow, for years and decades to come, the debate will rage over the greatest Boston Red Sox player ever. One generation will argue for Ted Williams, another will offer a compelling case for Carl Yastrzemski or Jim Rice or Pedro Martinez.

It's indisputable, though, that David Ortiz is the most prolific winner in the franchise's 115-year history.

And so, on the occasion of Ortiz's final regular-season game, the Red Sox showered their iconic designated hitter with gifts, brought back 24 of his former teammates from the 2004, 2007 and 2013 World Series-winning teams and announced they will retire his No. 34 early next season, making him the first player to have his uniform number taken out of circulation by the Red Sox before he is elected to the Hall of Fame.

Ortiz was feted in an emotional 40-minute pregame ceremony at Fenway Park that included Massachusetts Gov. Charlie Baker, Boston Mayor Marty Walsh and even Dominican Republic President Danilo Medina and concluded with Big Papi going down on one knee and doffing his cap to salute the fans.

Before the festivities, Red Sox manager John Farrell said, "there may be no more important player ever in this organization," and Major League Baseball commissioner Rob Manfred called Ortiz "transformational," noting that he "changed the course of this franchise" and "changed the city," a reference to the slugger's impassioned and expletive-laced speech in the aftermath of the Boston Marathon bombings in 2013.

"We have great memories and there's still great memories to be made in the next few weeks, but he's a legend and he's going to be missed by all of us," Walsh said. "What he's done off the field is almost as big as the accomplishments on the field. What he's done with his foundation and really lifting the city up following the Marathon bombing, everyone climbed on his back and he just got the city back on track."

As much as anything -- including his 540 career home runs -- that will be Ortiz's legacy in Boston. He represents the only common denominator between the 2004, 2007 and 2013 World Series champions, but more than that, he came to symbolize the city since his arrival in 2003.

Ortiz was given a haul of gifts that included the creation of a fellowship program to promote diversity in front offices across MLB. Baker presented him with a sign for the "David Ortiz Bridge," a renamed span of Brookline Avenue that crosses over the Massachusetts Turnpike, while Walsh gave him a street sign for "David Ortiz Drive," a newly named section of road near Fenway Park.

Later, a parade of former teammates, including Manny Ramirez, poured onto the field, with Martinez, Mike Lowell and Jonny Gomes holding the 2004, 2007 and 2013 World Series trophies, respectively.

"We had a lot of, I would say, elite players, and I think David is one of the catalysts to that," Lowell said. "The fact that he is someone from another country that endeared himself to learning English and being able to express himself, I think he was able to really bridge a gap. He already had that relationship with the Latin players, but I think it really extended to guys from everywhere. When you're that good and you still make other people feel important, I think that's a pretty special quality."

And it wasn't only with his fellow teammates. The Red Sox Foundation and team ownership pledged to donate a total of $1 million to the David Ortiz Children's Fund, a charity that has provided life-saving surgeries for more than 500 children in New England and the Dominican Republic.

"He can have a conversation with the CEO of a Fortune 500 company or a transplant recipient who's 8 years old and feel like everybody is engaged and be on the same level with everyone in between -- all the while in a second language," Farrell said. "He's truly a remarkable person."

In 2009, Ortiz's name was leaked to The New York Times as one of the players who tested positive for PEDs in 2003 survey testing, which led to MLB's current drug-testing policy. Manfred noted there were several results that were scientifically indisputable at the time, but could not say whether Ortiz was among them because MLB agreed to keep results confidential and the results were subsequently destroyed.

"I do know that he's never been a positive at any point under our program [implemented in 2004]," said Manfred, who indicated he will meet with Ortiz in the Dominican Republic this winter to discuss a potential role as an ambassador for the league. "I think that the feeling was, at the time that name was leaked, that it was important to make people understand that even if your name was on that list that it was entirely possible that you were not a positive."

But this was a day to celebrate Ortiz, who completed one of the best farewell seasons in baseball history and will now have one last postseason with the Red Sox to add a fourth title to his résumé.

"With no disrespect to the greats who have worn this uniform, I think what we've seen over the past 14-15 years, the way this franchise has elevated itself, there may be no more important player ever in this organization," Farrell said. "Just the visibility, the magnitude, in combination with the winning, David Ortiz is right in the hub of that."