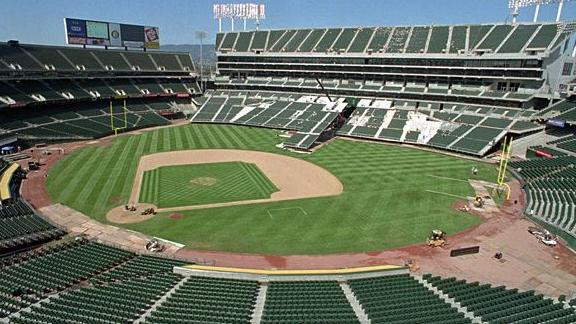 Oakland's O.co Coliseum is the lone facility shared by a Major League Baseball club and a team in the National Football League. Predictably, each side has a different vision for the future of the stadium.

Because while baseball's Athletics are working on a 10-year lease to stay at the Coliseum, football's Raiders are in talks to have the aging structure demolished in 2015 to make room for a new home for the Raiders, according to a report by the San Francisco Chronicle on Wednesday.

The Raiders have not returned messages to ESPN.com.

Per the report, the talks to have the Coliseum face the wrecking ball were discussed in a memo to Oakland mayor Jean Quan "from planners of the city-backed Coliseum City sports-retail project [that] stunned officials of the Oakland-Alameda County Coliseum Authority -- the agency that just reached an agreement to keep the A's in the existing ballpark for a decade."

Initially, the Athletics' lease at the Coliseum was to end following the 2015 season, which would have given the Raiders almost three years to build a new home for themselves on the site by 2018. The so-called Coliseum City project would include a hotel, restaurants, housing and stores as part of a revitalization project.

With the Athletics' desire to move south to San Jose well-known, Raiders owner Mark Davis has said that he wants the Coliseum area for his team, but he could envision two new stadiums on the site -- one for the A's and one for the Raiders.

"It will be critical to demolish the existing stadium in 2015" if the project is to be finished on time, Coliseum City attorney Zachary Wasserman said in the July 2 memo to Quan and City Administrator Henry Gardner, per the Chronicle report.

Wasserman added that the Raiders "are making arrangements to play elsewhere," the Chronicle added, without specifying where, exactly.

The stadium is actually controlled by the Coliseum Authority, whose chairman is Nate Miley, who is also the county supervisor. He told the Chronicle that demolishing the Coliseum was "totally preposterous. ... We still owe about $180 million on the stadium.

"This is either smoke and mirrors, or they're on crack."

The Raiders left Oakland for Los Angeles in 1982 and returned in 1995 after the city and county taxpayers paid for the Coliseum's refurbishment.

The A's, meanwhile, have drawn a figurative line in the Coliseum's infield dirt, although they reportedly have an out in the pending lease extension that could have them out of the stadium with two years' notice, something they told the Chronicle they would do if the Raiders put down a $10 million deposit on a new football stadium.

"From our position, we just don't think that [Raiders project] is going to happen -- we are betting it doesn't," A's vice president Ken Pries told the Chronicle.