Roethlisberger: Be careful with RB 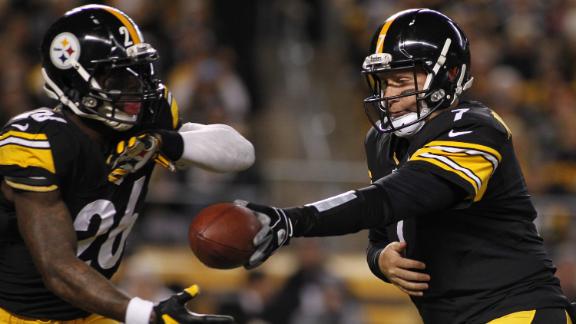 PITTSBURGH -- Steelers quarterback Ben Roethlisberger called Le'Veon Bell the "best all-around back in the game," but he also expressed concern about the second-year player's workload.

Bell, the only NFL player with at least 1,000 rushing yards and 600 receiving yards this season, played all but two of the Steelers' 90 offensive snaps in a 35-32 loss to the New Orleans Saints on Sunday. He carried the ball a career-high 33 times in the Steelers' previous game, a 27-24 win at Tennessee on Nov. 17.

"I don't know of a running back since I've been here that has basically been able to play every single snap, but you do have to be careful," Roethlisberger said Tuesday during his weekly radio show on 93.7 The Fan in Pittsburgh. "I hope we don't run him into the ground if you will, but it's that stretch of the year where everyone's going to give it everything they have. He probably wants to be in there every single play because that's the type of player he is."

Coach Mike Tomlin said the Steelers are confident Bell can handle a heavy workload that only increased after the team waived LeGarrette Blount, his backup, last month.

"I'm not overly concerned about that," Tomlin said Tuesday at his weekly news conference. "He's a highly conditioned guy, he's a mentally tough guy. Personally I think he's built for it. He's excited about having an opportunity to do that for us."

Tomlin said the Steelers took such an interest in Bell prior to taking him in the second round of the 2013 NFL draft in large part because of the durability he displayed at Michigan State. The 6-foot-1, 225-pounder led all FBS running backs with 382 carries in 2012, his final season with the Spartans.

"A lot of the football went through him his last year at Michigan State and all you had to do was watch him over the course of that season and gain a level of comfort with his ability to tote the load," Tomlin said. "Obviously during his time here he proved that he is capable of doing that on an NFL stage."

Bell piled up 254 yards of total offense against the Saints. Rookie running back Dri Archer played three snaps and received just one carry.

Roethlisberger said the key to making the 5-foot-8, 173-pound Archer a bigger part of the offense is using him on regular plays, since opposing teams are looking for trick plays when the speedy scatback is in the game.

Roethlisberger's more immediate concern is playing better after he threw two interceptions against the Saints and completed just 19 of 42 passes before leading two late touchdown drives. He ended up with 435 passing yards total but said he was in "disbelief" after a game in which he consistently overthrew his receivers.

"I just didn't play well and for no rhyme or reason," Roethlisberger said. "I was just disappointed that I didn't make all of the throws that I wanted to make, and you've got to win the home games. I just feel like I let a lot of people down."

Roethlisberger said he had some mechanical issues during the game and that he didn't always step into his throws. The 11th-year veteran hurt his right hand in the first quarter when he hit it against a wrist pad of a Saints defensive player while throwing a pass, but he did not use that as an excuse for his scattershot passing.

Roethlisberger and the Steelers visit the Cincinnati Bengals on Sunday in a game he called a "must-win." The Bengals are 8-3-1 and lead the AFC North but they play the Steelers (7-5) twice this month.

"It's not over yet," Roethlisberger said. "I think that was kind of the mood yesterday. We still control our destiny."