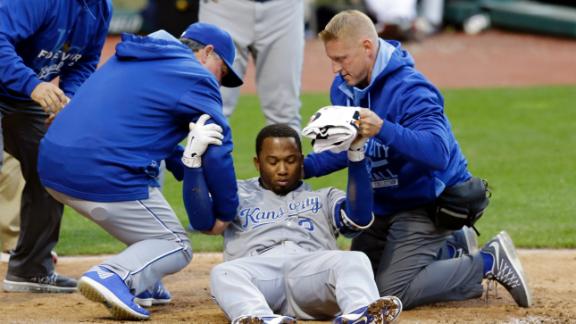 CLEVELAND -- Kansas City Royals shortstop Alcides Escobar suffered a bruised left cheek when he was hit in the head by a pitch from the Indians'Danny Salazar in the fifth inning on Wednesday.

Escobar was hit on the left side of the helmet and dropped to the ground immediately as two Royals trainers rushed onto the field.

Escobar stayed down for several moments before being moved into a sitting position.

He walked to the dugout with help from the trainers and was taken to the clubhouse.

The Royals said Escobar was removed for precautionary reasons and further evaluation.

Salazar was upset over the incident and patted his hand in his glove as Escobar left the field. Kansas City's Mike Moustakas, the on-deck hitter, knelt down while several Indians on the field looked on in concern.

"I was a little bit nervous,'' Salazar said. "That's not part of my game. I'm never going to try to do that intentionally to a guy.''

Kansas City pitcher Yordano Ventura, who was ejected from his past two starts and is facing a seven-game suspension, didn't retaliate in the bottom of the inning.

Royals manager Ned Yost was pleased with Ventura's composure, if not his results. He allowed five runs in 5 1/3 innings as he appeals his seven-game suspension for instigating a brawl against the White Sox.

"I thought Yordano did a really, really good job with his emotions,'' Yost said. "There is a fine line between being a fierce competitor and not stepping over the line. It's a learning process that he's going through.''

Escobar ended up with a headache but didn't go to the hospital and didn't have X-rays.

"It hit straight on my helmet, and I was real dizzy when it happened,'' he said. "I feel OK, not bad, way better than when I got hit.''

Yost said he didn't think Escobar would go on the disabled list, but it's unclear when he'll return to action.

Salazar allowed four runs in six innings,improving to 3-0 since being called up from the minors, as the Indians beat the Royals 7-5 to snap a four-game losing streak. Ventura took the loss, falling to 2-2 this season.