Ryan Lindley to start for Cardinals 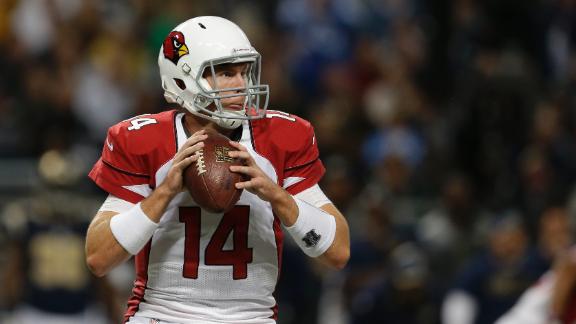 Arians put all the rumors and reports to bed Monday afternoon by naming Lindley the starter over rookie Logan Thomas. But Arians said Thomas could see the field in packages that Arizona has specifically designed for him.

Lindley, who was released by Arizona on Aug. 25 and re-signed on Nov. 22 in the wake of Carson Palmer's season-ending ACL injury, won the job largely because he has more experience than Thomas, Arians said.

"I think he's a little bit more ready right now having been back in the system for a while," Arians said. "Like I said before, I think Logan's going to be a great player. Sometimes you can put guys in positions to fail. I want him to succeed when he plays.

"I think Ryan gives us a great opportunity."

Arians said Drew Stanton, who left Thursday night's 12-6 win against St. Louis in the third quarter with a right knee injury, could be out two to four weeks.

"Everybody's so different in how they heal," Arians said. "So much of it's your makeup mentally -- how bad do you want to heal? And he wants to heal up fast. We'll see."

Before Thursday, Lindley hadn't thrown a regular-season pass since 2012, when he was 1-3 as a starter for the Cardinals as a rookie. He completed 52 percent of his passes and averaged 4.4 yards per attempt. He didn't throw a touchdown in six games compared to seven interceptions.

"Go sling it, baby," Arians said he told Lindley. "Go have fun. You're here for a reason."

Arians said Thomas' package for Sunday will be the same one that's been in place for about four weeks, and it'll use Thomas' running and passing abilities.

"It's all stuff we've done," Arians said. "Whether we've shown it this year or not, it's been practiced all year."

It took Lindley about two weeks to pick up the Cardinals' offense from where he left off after rejoining them in November, Arians said. Most of what Lindley missed during his time on the San Diego practice squad was changes to verbiage in the offense.

Arians said it was a tough decision back in August to let Lindley go, but this time around, the choice to start Lindley over Thomas was in the best interest of the team.

"I've loved Ryan since we've had him," Arians said. "He's a very bright guy. He understands this offense. He's got more than enough arm. And he knows what to do with the football.

"He knows how to protect himself as far as hots, sights and everything else."