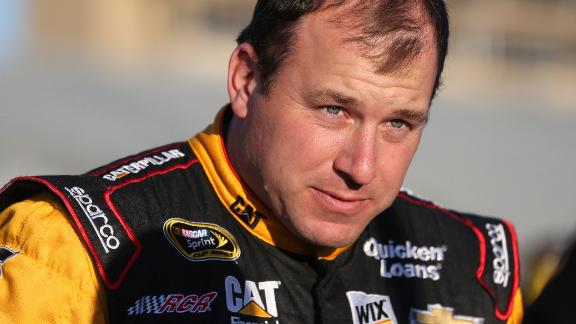 NASCAR dockedRyan Newman 75 points and suspended his crew chief, Luke Lambert, for six races and fined him $125,000 after it found the team had doctored its tires during the March 22 race at Auto Club Speedway.

NASCAR has been on the lookout for teams bleeding air from the tires, likely by putting a small hole in them. Allowing air to bleed would increase grip, which typically decreases during a run as the tire begins to wear and air pressures build.

In announcing the penalty Tuesday, NASCAR said that the Richard Childress Racing No. 31 team violated the rule that states it is illegal to use "any device, modification, or procedure to the tire or wheel, including the valve stem hardware, that is used to release pressure, beyond normal pressure adjustments, from the tire and/or inner shield."

"NASCAR takes very seriously its responsibility to govern and regulate the rules of the sport in order to ensure competitive balance," NASCAR executive vice president Steve O'Donnell said in a statement. "We've been very clear that any modifications to race vehicle tires is an unacceptable practice and will not be tolerated."

After the March 15 race at Phoenix, NASCAR took the tires of Kevin Harvick and Joey Logano and determined there were no issues. Then after the race the following week at California, NASCAR took the tires of Newman, Harvick, Kurt Busch and Paul Menard. It sent at least some of those to a third party for evaluation, and it announced the penalty Tuesday for Newman while clearing the rest of the teams.

RCR has not yet decided if it will appeal the penalty, considered a P5 on NASCAR's 1-to-6 scale. The penalties were escalated by 25 points and $50,000 because they occurred during a race.

"We understand the seriousness of the penalty," RCR President Torrey Galida said in a statement. "In fact, RCR has been one of the most outspoken opponents against 'tire bleeding' since the rumors began to surface last season.

"Once NASCAR provides us with the specific details of the infraction we will conduct a further internal investigation, and evaluate our options for an appeal."

Newman dropped from sixth to 26th in the standings with the points penalty, making it much more difficult for him to advance to the Chase for the Sprint Cup on points alone but also still eligible to make the Chase if he can win in the first 26 events. The team, with its 75-point penalty in the owner standings, dropped from seventh to 27th.

The suspensions, pending appeals, are set to begin with the race next week at Texas and would be in effect for seven events because the Sprint All-Star Race in May does not count. Those suspended would return for the May 31 race at Dover.

All of the crewmen suspended also will remain on NASCAR probation throughout the season.