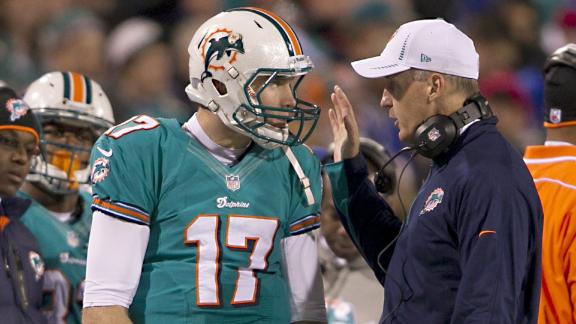 LONDON -- Ryan Tannehill was in a more jovial mood Friday, saying he's moved past this week's quarterback controversy after Miami Dolphins coach Joe Philbin was noncommittal on the starter for Sunday's game at Wembley Stadium.

"It's done," Tannehill said after Friday's practice in preparation for the Oakland Raiders. "It's something we faced during the week, and it's done. Now we're just getting ready to play. I'm excited to be here in London."

Earlier this week, Philbin was noncommittal as to who the Dolphins' starting quarterback would be, which fueled speculation and created a distraction.

Tannehill, who is off to a slow start and on pace for career lows in completion percentage (56.5) and passer rating (74.1), acknowledged that this has been the toughest week of his NFL career. However, herepeated Friday that everything has been smoothed over with Philbin.

"We talked, and we're good," Tannehill said. "We're on the same page. Like I said, we're getting ready for this game."

The Dolphins (1-2) were in a loose mood upon arriving in London on Friday. There were plenty of smiles on players' faces during Miami's walk-through practice, and Tannehill said there were some pranks pulled by teammates during the extended flight.

Tannehill expects the Dolphins to respond well after a long week of travel and controversy.

Veteran defensive tackle Randy Starks will not play Sunday. Starks, who has a back injury, did not travel with the team. Rookie linebacker Chris McCain also didn't make the trip because of a personal issue, according to Philbin.

Tannehill, Philbin Not On The Same Page
Adam Schefter discusses Dolphins coach Joe Philbin declining to give QB Ryan Tannehill an endorsement as the starter heading into Sunday's game against the Raiders.