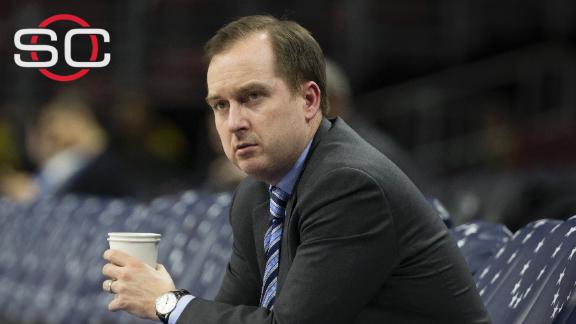 After three seasons of aggressively stockpiling draft picks and receiving criticism for his approach because of the heavy losing it spawned, Sam Hinkie has abruptly stepped down from his post as general manager and president of basketball operations of the Philadelphia 76ers.

Sixers managing general partner Josh Harris has confirmed ESPN.com's initial report of Hinkie's sudden departure, saying in a prepared statement: "While we are disappointed in Sam's decision, we would like to sincerely thank him for his contributions over the past three seasons. There is no question that Sam's work has put us in a very strong position to take advantage of numerous opportunities for an exciting future."

Hinkie addressed the Sixers' ownership group Wednesday in a letter, which wasobtained by ESPN.com.

"Given all the changes to our organization, I no longer have the confidence that I can make good decisions on behalf of investors in the Sixers -- you," he wrote. "So I should step down. And I have."

Sources told ESPN.com that Hinkie, sparked heavily by the Sixers' interest in hiring two-time NBA Executive of the Year Bryan Colangelo to join their front office, decided to leave the organization rather than surrender even more authority than he already had this season.

Hinkie's future with the club had widely been considered tenuous since December, when Colangelo's father, Jerry, was hired as Philadelphia's new chairman of basketball operations. Jerry Colangelo isthe managing director of USA Basketball and long considered one of the NBA's most successful owners and executives.

Sources say the Sixers, as of Wednesday night, were in advanced negotiations to hire Bryan Colangelo, with one source telling ESPN.com that his arrival was "imminent" after he was recently edged out for the Brooklyn Nets' GM job by San Antonio Spurs alumnus Sean Marks.

Hinkie declined to comment when reached Wednesday night by ESPN.

His farewell letter to the Sixers' ownership group spanned 13 pages.

In one passage, Hinkie wrote: "What I hope to accomplish here is to give you insight into what has transpired behind the scenes in ways you might not have otherwise heard about. Many of you attended our most recent board meeting in New York, where many of these topics were addressed. But for all twelve of you, I hope that this provides a deeper look into what you have at your organization.

"Accordingly, you should anticipate some mild cheerleading [of others] sprinkled with a healthy dose of self-flagellation about things I've done wrong. There has been much criticism of our approach. There will be more. A competitive league like the NBA necessitates a zig while our competitors comfortably zag. We often chose not to defend ourselves against much of the criticism, largely in an effort to stay true to the ideal of having the longest view in the room."

In the letter, Hinkie quoted no less than 13 well-known contrarians from all walks of life, including billionaire investor Warren Buffett andNew England Patriotscoach Bill Belichick.

Hired in the spring of 2013, Hinkie has become synonymous with what is known in Philadelphia as "The Process," relying heavily on draft picks and trades designed to amass future assets at the expense of winning in the short term in an attempt to gradually restore the Sixers to their former glory.

Philadelphia will have up to four first-round picks in the draft this June, but according to the Elias Sports Bureau, the Sixers also rank as the only team in the league that doesn't have a player on its roster from the 2012-13 season, coinciding with when Hinkie took over.

Hinkie drafted Michael Carter-Williams with the 11th overall selection in his first draft. But after Carter-Williams earned rookie of the year honors in 2013-14, he was traded the following season in a multi-team deal that landed him in Milwaukee and gave the Sixers a valuable future first-round pick from Phoenix via the Los Angeles Lakers. That pick is top-three protected in 2016 and 2017 and fully unprotected in 2018.

Hinkie later traded All-Star guard Jrue Holiday to New Orleans for the draft rights to Nerlens Noel and drafted Jahlil Okafor No. 3 overall out of Duke in 2015. But two more of Hinkie's prized top draftees have yet to play in an NBA game: centerJoel Embiid, theNo. 3 overall pick in 2014, and forward Dario Saric, the No. 12 pick in 2014. Embiid has lost the first two seasons of his pro career to injury; Saric continues to play in Europe.