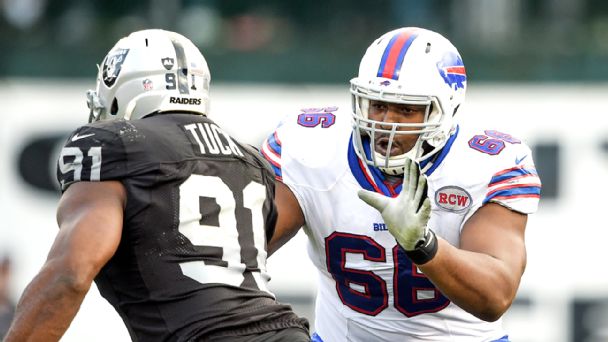 Henderson, 24, missed the first four games of the season for his initial violation of the substance abuse policy. Henderson's agent, Brian Fettner, told ESPN NFL Insider Adam Schefter in September that the positive test was triggered because Henderson was using medical marijuana to treat Crohn's disease, an inflammatory condition that affects the digestive system.

After serving his four-game suspension, Henderson has appeared in just one game this season -- in a reserve role. Jordan Mills has started all 11 games this season for the Bills at right tackle.

Henderson tested positive for marijuana at the NFL combine in 2014, a source told Schefter. He also was suspended for failed drug tests while playing at Miami. His history with substance abuse caused some teams to remove him from their draft boards.

Henderson missed the final five games of last season after he was diagnosed with Crohn's disease. The third-year tackle told The Palm Beach Post in August that he underwent surgery in January to remove 2 feet of his intestines, resulting in him losing almost 50 pounds and having to wear an ileostomy bag until his intestines were reattached in April. He is on a strict diet that prevents him from eating gluten or certain vegetables.

Henderson discussed medical marijuana use in treating Crohn's disease during an interview with The Buffalo News in October.

"I've got doctors telling me this is the No. 1 medicine that would help your disease," Henderson told the newspaper. "You try to tell that to the league, and it seems like they didn't care too much."