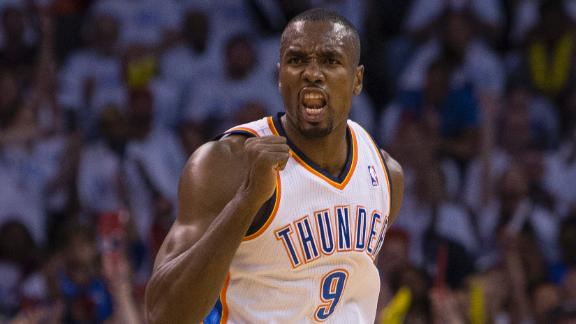 OKLAHOMA CITY -- Thunder power forward Serge Ibaka, who was expected to miss the rest of the postseason with a left calf strain, has been upgraded to day-to-day and could return for Game 3 of the Western Conference finals on Sunday against the San Antonio Spurs.

Thunder general manager Sam Presti said Friday that with the swelling of Ibaka's leg going down, the Thunder's medical team can no longer say he's out.

"We're surprised that we're here, although grateful that he's made enough progress to say he's not ruled out," Presti said of Ibaka. "I think it's important, when you look at this, to recognize that we're not saying that he's playing, but what we're really trying to indicate is that the information is telling us that we can't rule him out."

Ibaka suffered a Grade 2 strain of the plantaris in Game 6 of a West semifinal series against the Clippers on May 15.

The Thunder trail the best-of-seven conference finals 2-0 and have dearly missed the defensive presence of Ibaka, who has led the NBA in blocks four consecutive seasons.

"A big part of this is the swelling in his calf has reduced incredibly rapidly, more so than any of us could've expected or our medical staff could've projected," Presti said. "And as a result of that he's demonstrating a function level and a stability level that's better than where we thought we would be."

The Spurs won the first two games by a combined 52 points, with Game 2 being a 35-point blowout. The Spurs scored 66 points in the paint in Game 1 and have shot 78 percent inside for the series.

Ibaka is participating in light shooting drills but has not gone through a full practice or any contact drills.

"He'll go through a battery of tests such as gamelike conditions, conditioning, and a lot of that is how he feels the following morning and what he's able to tolerate," Presti said.

Asked about the possibility of returning for Sunday's game, Presti said, "The best way for me to answer that question is to say we can't rule him out."

Thunder coach Scott Brooks said after Game 1 that Ibaka "was not coming through that door," and on Friday he said the team is not planning and preparing for Ibaka to be ready Sunday, either.

"We'd like to have him back, but we can't worry about that," Thunder center Kendrick Perkins said. "We're down 0-2 right now. We've got to worry about winning the next game at home. You can't really put all your effort into is Serge coming back or not. We've got to go out here and win this game and figure out why we're getting beat so bad."