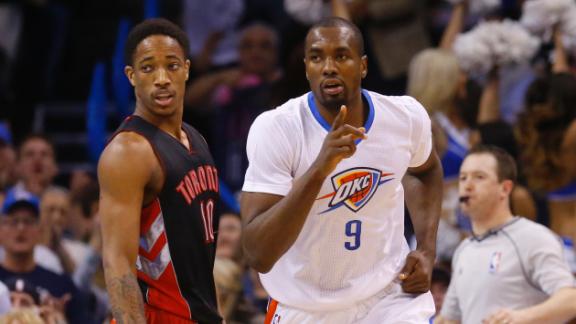 OKLAHOMA CITY -- Oklahoma City Thunder forward Serge Ibaka will miss an estimated four to six weeks after having an arthroscopic knee procedure to address swelling and soreness in New York on Tuesday.

"Serge is a guy that always wants to be out on the floor, rarely misses time," Thunder general manager Sam Presti said, "but we felt like with where the symptoms were, we didn't think it was going to be improving, and because of that, this was the necessary step."

Ibaka began experiencing soreness at the end of February, and the team began a treatment plan to manage it, which included aspirating the knee. Presti said Ibaka underwent an MRI that revealed no structural or concerning long-term issues.

"These type of roughening episodes are not uncommon," Presti said Tuesday. "They're really just the result of wear and tear, and it happens to athletes over time. Generally you like to deal with these in the offseason, but what separated Serge's a little bit, and kind of led us to where we ended up, is that he was having some swelling as a result of that."

Ibaka has missed the Thunder's past three games because of the soreness. He traveled to New York for further evaluation, and the decision was made to take the next step to clean up the knee.

"Obviously, a setback in terms of timing for us," Presti said. "It would've been ideal if this was something we could've attended to over the summer. But the long-term health of the player and the ability to play at a high level during the season is the most important thing."

Before being sidelined with the soreness, Ibaka was averaging 14.9 points on 52.5 percent shooting with 8.2 rebounds and 3.2 blocks since Feb. 1, as the Thunder coped with Kevin Durant being sidelined.

"What he was experiencing over the last several weeks was not necessarily any significant pain, or really anything limiting," Presti said. "In fact, he was playing some of his best basketball, but as time went on and the swelling came back after the different steps were taken, he was experiencing some stiffness, and limited mobility and discomfort from that."

The Thunder are 37-30, a half-game up on the New Orleans Pelicans for the West's eighth seed. There are about four weeks left in the Thunder's season, meaning if Ibaka returns on the front end of his timetable, he would be available for the Thunder's opening-round playoff series, should they qualify.

In two of the three games Ibaka missed, the Thunder started the big man combination of Steven Adams and Enes Kanter. In those games, the duo has produced a combined 66 points and 50 rebounds.

"You always want everybody available to you, but that's not realistic all the time in the NBA," Presti said. "We've learned that, and we feel really good about the depth of our team. We feel really good about the potential of our team. And we expect to play well." The Thunder have dealt with a remarkable number of injuries this season, losing Durant, the reigning NBA MVP, for 40 games, and Russell Westbrook for 15. They started the season 3-12, playing most of November without either star, but have climbed out of that hole to be in playoff contention.

"We feel like we've put ourselves in position, over the first part of the season, to be able to control our own destiny, and find ways to play at a consistent level defensively and continue to evolve offensively," Presti said. "Which has been our focus coming in to this season. So we're still in position to do that. We obviously have got to make some accounting for the fact we won't have Serge going forward, but we feel really good about the group that we have, and I feel that our standard of play should continue to be where it's been and our focus and our goals as to what drives our success remain unchanged."

Ibaka, 25, is averaging 14.3 points, 7.8 rebounds and 2.4 blocks in 64 games this season. He has led the NBA in total blocked shots the past four seasons, a streak that will end this season.

Ibaka To Undergo Knee Procedure
ESPN NBA Insider Chris Broussard discusses the time frame for Serge Ibaka's recovery after undergoing a knee procedure to address some persistent soreness and what the Thunder will do in his absence.