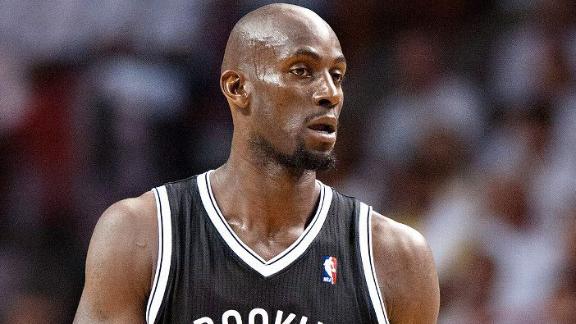 EAST RUTHERFORD, N.J. -- All indications are that Kevin Garnett is preparing to return for another season with the Brooklyn Nets, according to a league source.

Barring something unforeseen or a change of heart, Garnett has indicated he will begin preparing shortly for his 20th season.

General manager Billy King reiterated on Wednesday that the Nets have been operating as if Garnett is under contract and will play next season until told otherwise. King said he has been in touch with Garnett and added that he is optimistic about having the big man back and that the 38-year-old will begin training soon.

"Yes," King said when asked if he believes Garnett will be able to play at a high level next season. "I think he's preparing earlier this year than he did last summer."

Garnett averaged 6.5 points and 6.6 rebounds in 20.5 minutes a game as head coach Jason Kidd monitored his playing time. Garnett played in 54 games and surely will have his minutes monitored again next season, when he is slated to make $12 million. The Nets will also have center Brook Lopez returning from another foot surgery and will have to monitor his minutes, as well.

The Nets traded three first-round picks and five players last summer for Paul Pierce, Garnett and Jason Terry. With Garnett expected back, the Nets have to wait to see if Pierce will return.

Pierce is an unrestricted free agent but the Nets can offer Pierce more money than any other team because they own his Bird rights.

King was asked if he expects negotiations with Pierce to be difficult.

"I will know come July 1," King said. "That is when everybody can start making offers and you get a feel for where the market is going to be. Right now you can speculate and have ideas of who may pay and what they may do but you don't know what somebody may do in the draft, make a trade."

"If (free agents) leave, then we go to Plan B," King added of his general thinking. "Players leave and the organization has to be bigger than one player."

The Nets face some uncertainty in free agency. Besides Pierce, Shaun Livingston will be a free agent. Key reserves Alan Anderson and Andray Blatche will also hit the market after opting out of their contracts.

The Nets want to bring as many of their players back as possible but are bracing for Livingston to get more than they can pay him from another team. The Nets can only offer the point guard their mini midlevel exception of $3.3 million for three seasons. Kidd started Livingston at point guard alongside Deron Williams.

"As many guys as we can keep here and keep some continuity, the better," King said. "Getting AK (Andrei Kirilenko opted into his contract) back helps. Now this will be Deron and Joe's (Joe Johnson) third year here together. They become much more familiar with each other.

"Sometimes it's great to go buy the new car, but sometimes the car you had runs better than the new one."