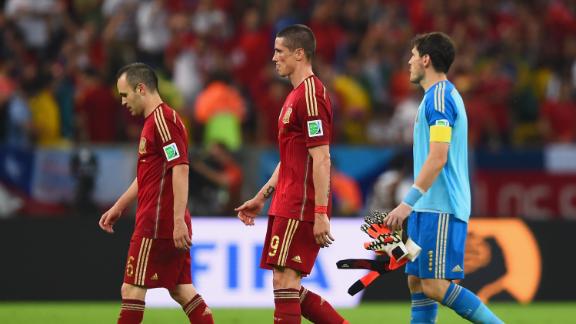 Xavi Hernandez looks to have played his last game for Spain, while Monday's final World Cup Group B match against Australia could be the final international appearance for other long-serving stars including David Villa, Xabi Alonso, Fernando Torres and Pepe Reina.

- Alvarez: Desperate to return home
- Train: Legacy must be preserved
- Duarte: Lessons from Brazil in '66
- Mata: Spain will hit back at Euro 2016

Spain's campaign in Brazil has turned into anti-climactic send-off for the generation of players who together won the Euro 2008, World Cup 2010 and Euro 2012 tournaments but saw hopes of an unprecedented fourth consecutive international competition win crushed by emphatic Group B defeats to the Netherlands and Chile.

Those unexpected losses led to criticism of coach Vicente del Bosque for sticking too long with his veteran players. Reports that Xavi, 34, had already agreed to move from Barcelona to Qatari club Al Arabi being taken by some as evidence he was no longer up to the standard required at a World Cup.

While revealing in AS that Xavi would not play against Australia due to a minor injury problem, Del Bosque said that the midfield lynchpin of Spain's previously all-conquering side did not need to prove anything further to those now taking cheap shots -- perhaps due to their own club allegiances to Real Madrid.

"Xavi will not play, he has had a little issue in training," Del Bosque said. "For Xavi one game more or less will not make him recognised. He was the player who ran the most metres [against Netherlands].

"When we go into the causes of the defeat, everyone wants to make a revolution. We just save the youngsters and the veterans are exiled? I believe people need to look at themselves. Anyone who does not recognise what Xavi Hernandez has done wears a jersey even when going to bed."

While Xavi has yet to publicly confirm his international retirement after 133 caps, Villa, 32, who has a record 56 goals in 95 appearances so far, made public before the tournament that he would be calling it a day this summer.

Captain Iker Casillas, who made basic errors in both Spain's first two games in Brazil, could also step aside. However, reports suggest the 33-year-old Real Madrid goalkeeper has yet to make up his mind over his future.

Casillas' club colleague Alonso, whose claims that Spain were neither physically nor mentally prepared for this summer's tournament continue to be debated, told Al Primer Toque that he had also yet to take a final decision on the matter.

"I am not yet at that moment," Alonso, capped 113 times, said. "What I want is this to end, to go on holidays, to disconnect a bit. Then everything will have its moment. This is not the time for it."

Del Bosque has confirmed that Liverpool's Reina -- who has said he will remain available for selection in future -- would earn a 31st cap in goal in Monday's game in Curitiba, while Villa, Juanfran Torres, Juan Mata and Raul Albiol should also all start as they have not featured so far in the competition. Andres Iniesta is set to play his 100th international game in midfield, in less than ideal circumstances.