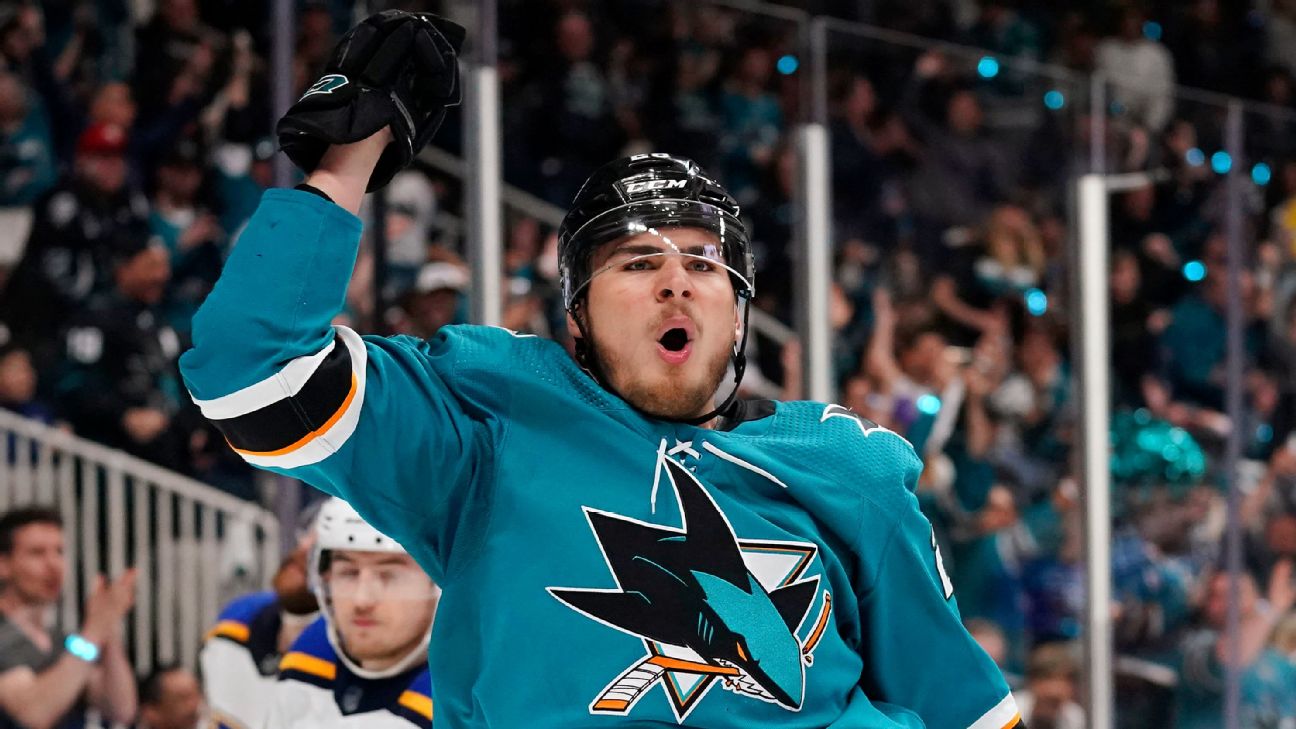 The home teams have now won both Game 1s of the conference final round, as the San Jose Sharks looked dominant in their 6-3 victory over the St. Louis Blues.

Here's what happened in the NHL last night (check out replays of every playoff game on ESPN+) and what to watch for today, in today's edition of ESPN Stanley Cup Playoffs Daily:

This one came way too easy for the Sharks. Both teams were coming off Game 7 wins, but the Sharks were playing at a different speed than the Blues, whether it was pressuring St. Louis players into turnovers or pouncing on offensive chances in the attacking zone. Logan Couture, Gustav Nyquist and Timo Meier continued their dominant play, Couture and Meier finished with two goals and an assist apiece. Kevin Labanc and Joe Pavelski -- on a 5-on-3 power play -- were the other goal scorers.

The Blues got tallies from Joel Edmundson, Ryan O'Reilly and Tyler Bozak, but otherwise turned the puck over too much (12 giveaways) while hanging Jordan Binnington "out to dry" according to forward Robert Thomas.

1. Logan Couture, C, San Jose Sharks. Couture has the NHL postseason lead in goals (11) and points (17) after his three-point night in Game 1. This is just the third time in Sharks franchise history they've had a player reach 10 goals in a single postseason, and Couture has been that player twice.

2. Timo Meier, RW, San Jose Sharks. Meier was the complete package for the Sharks in Game 1. He used his defense and his physicality to overpower the Blues for a turnover that led to San Jose's first goal. He used his speed and stick handling to score their fourth goal on a partial breakaway. He had a little luck on his fifth goal, bouncing the puck off of defenseman Vince Dunn's skate. (He said he was aiming for Binnington.)

3. Ryan O'Reilly, C, St. Louis Blues. The center's second-period goal, on which he collected the puck and deked around Martin Jones to tuck it home, broke an eight-game goal drought for a player who had 28 of them in the regular season.

Sometimes one goal can tell the story. The Blues giving the puck away on a Sharks' defensive play and then a San Jose forward, Meier in this case, making a great move to beat Jordan Binnington as his skaters let him down ... yeah, that's pretty much the epitome of Game 1.

The Blues' parade of turnovers was a combination of sloppy puck management by the defense, poor puck support by the forwards and, to give credit where its due, terrific pressure from a tenacious Sharks team. Or as Blues coach Craig Berube put it: "We were too spread out. In playoff time, you have to have numbers around the puck. You have to have puck support. We didn't have enough support. Couldn't make enough 10-foot passes," he said. "We didn't manage the puck very well. And they check well."

Hurricanes coach Rod Brind'Amour would like you to read beyond the box score. "You look at the score and you're like, 'Wow, that was not good,'" he said of his team's 5-2 loss to the Bruins in Game 1. "A large chunk of that game was really positive for us. Really, a small fraction that wasn't very good. At the end of the day, it's 1-0 them, right? So, you move on."

So what has to change? The Hurricanes have to stay out of the penalty box against the best power play of the postseason (30 percent!), for one. On the other side, Boston gets defenseman Charlie McAvoy back after his one-game suspension.

Nate Pavelski and Jagger Burns get their Fortnite emotes going during Game 1. I had a conversation with Nate about Fortnite in the Sharks' locker room during the Avalanche series, as we're both aficionados, and it was at that moment I realized that every time I meet my demise in that game, it's probably at the hands of a 9-year-old.

"He was a bull." -- Logan Couture on Timo Meier's performance in Game 1. 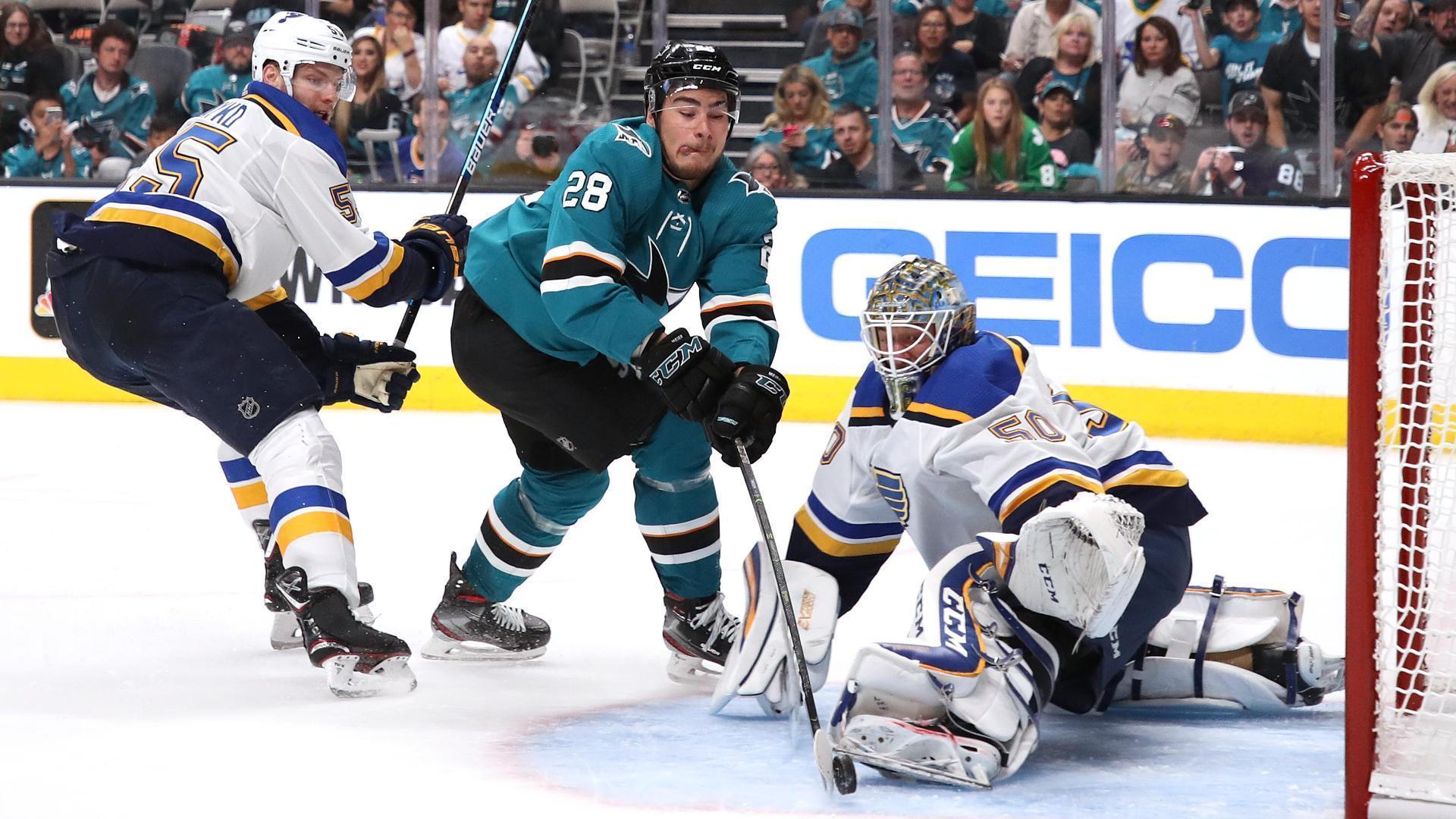 Meier scores two in Sharks' Game 1 win
Timo Meier scores a goal off a turnover, then gets the puck to go in from behind the net to help the Sharks beat the Blues 6-3. 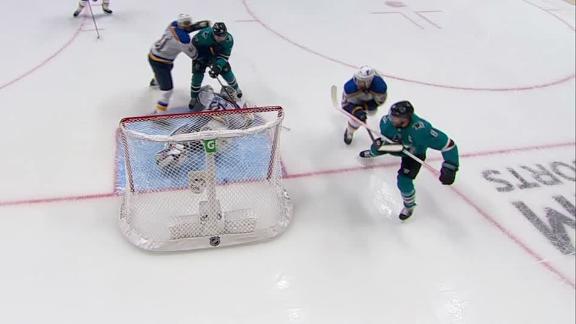