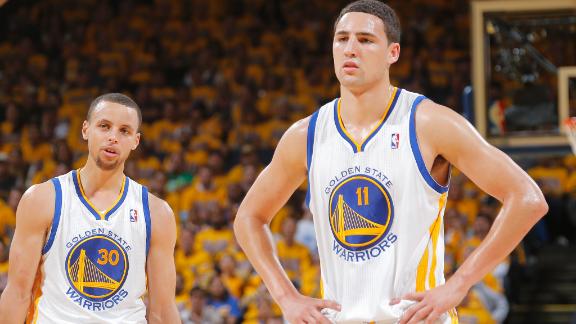 The Golden State Warriors' backcourt duo of Stephen Curry and Klay Thompson highlight a group of five players who plan to participate in next month's All-Star 3-point contest, Yahoo! Sports has reported.

"It's something that I've always wanted to participate in at least once in my career," Redick said Monday night. "I don't know if I've been in the conversation but I'm just excited and honored to be a part of All-Star Weekend."

The group makes up five of the top seven shooters in the NBA in 3-pointers made, with Matthews' 138 leading the league.

"It's a good field," Redick said. "You have to post a high score this year. I've watched a couple years at home and, um, it's not the best field ... just saying. Not the best field. You have non-shooters winning, but I think the NBA put together a great field this year. Hopefully everybody shoots well and it's a good show."

James Harden of the Houston Rockets (122) and Damian Lillard of the Portland Trail Blazers (120) are fifth and sixth. Harden leads the NBA in scoring average at 27.6 points per game.

Korver, shooting 53 percent, tops the NBA in 3-point accuracy with Thompson in third at 46 percent.

Curry made a late surge to passLeBron Jamesas the overall leading vote-getter for the All-Star Game and will start for the West.

Arash Markazi of ESPN.com contributed to this report.

Excited To See Curry, Thompson In 3-Point Contest?
Stephen A. Smith and Skip Bayless react to the news that Golden State's backcourt duo of Stephen Curry and Klay Thompson will participate in the All-Star 3-point contest.