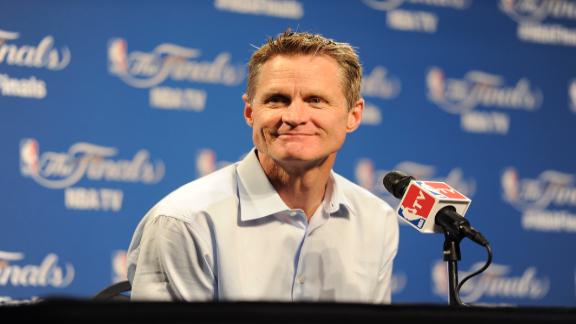 "I lied," he said to the media a few hours after he had, well, lied about who would be in the Golden State Warriors' starting lineup for Game 4 of the NBA Finals.

At Thursday morning's shootaround and at the pregame news conference, Kerr was asked if center Andrew Bogut would start.

Kerr's answer: There would be no changes in the starting lineup.

Lo and behold, Bogut did not start, Andre Iguodala did and it made a difference in the Warriors' 103-82 win over the Cleveland Cavaliers that evened the series at two games each.

The Warriors have played 101 games this season, and this was Iguodala's first start.

Iguodala gave the Warriors better spacing and pace, Kerr said, and he gave them some big points -- 22 in 39 minutes.

"It just gave us that pace from the start," Draymond Green said. "We kind of usually use it as a change-of-pace thing."

"He has been our best player all series," Kerr said of Iguodala.

"It made sense when [Kerr] told us just because we've been getting off to such slow starts," Warriors guard Stephen Curry said.

Curry added that Kerr is "not afraid to take a chance."

LeBron Jameshad nothing but praise for what Iguodala gave the Warriors.

"He's one of the X factors, and he came to play," James said. "He shot the ball extremely well. He hit four 3s. He was in attack. He got a couple dunks in transition early on in the game, which got him going, and he was really good for them."

James said replacing Bogut with Iguodala forced Cavs center Timofey Mozgov to guard a smaller player, "which he's not accustomed to ever," James said. "So he [Kerr] definitely gave us a little look defensively to start the game."

Kerr said he had three choices when asked about the starting lineup.

He could tell the truth, which strategically he compared to knocking on the door of Cavs coach David Blatt and explaining the change.

He could avoid the question, which he said would start all sorts of speculation on Twitter about who would start.

Or he could lie.

"Sorry, but I don't think they hand you the trophy based on morality," Kerr said. "They give it to you if you win. So sorry about that."